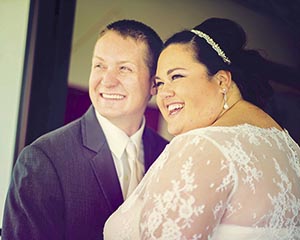 Kendall and Elizabeth (Goskesen) Christensen were married on May 6, 2016 at 5:30 p.m. at Bridge Community Church in Albert Lea, Minnesota.

Elizabeth is the daughter of Renae and Dayle Goskesen. Grandparents are Wayne and Joan Skov of Lyle, Minnesota, Quentin and Bernice Goskesen of Austin, Minnesota, and Bonnie Wiste of Mapleview, Minnesota, and the late Dale Wiste. She graduated from Austin High School in 2004, Luther College in 2008 and the University of Northern Iowa in 2010. She has bachelor of arts degree in communications and English and a master’s degree in higher education administration. She is currently employed as an area manager at Workforce Development, Inc.

Kendall is the son of Jane Bowman and Kevin Christensen. Grandparents are the late John and Barbara Christensen and Charles and Cora Carpenter. He graduated from Albert Lea High School in 2003. He’s currently employed as a carrier assistant at United States Post Office.

The couple are making their residence in Albert Lea.