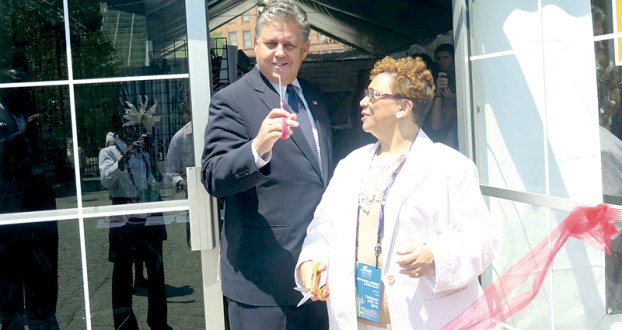 Meet the most politically connected man in Minnesota nobody knows

Cleveland — You won’t hear much about Jeff Larson during the Republican National Convention. By most accounts, he’d like to keep it that way.

A North Dakota native with deep roots in Minnesota, Larson is the person responsible for everything the next few days at Quicken Loans Arena. He’s been embedded in Cleveland for more than a year as CEO of the convention.

His team has helped raise millions of dollars and rounded up thousands of volunteers and staff. It’s on him now to make sure it all works, including making sure 125,000 balloons have been inflated and hung from the arena rafters to fall on delegates once Donald Trump accepts the nomination.

At a convention where there’s little Minnesota love — Trump finished third in Minnesota’s GOP caucuses, the delegation is sitting in the cheap seats and no Minnesotan will deliver a speech from the podium — national Republicans are betting heavily on Larson.

The Minnesota Republicans who know him say he’s more than up to the task.

“I can’t remember exactly when I first met Jeff. But I know him to be, I knew him to be, he probably still is the most politically connected person in Minnesota that nobody knows,” said former Minnesota Sen. Norm Coleman.

Coleman regards Larson as one of his closest political advisers. He’s also worked on the campaigns of President George H.W. Bush and President George W. Bush and he was the right-hand man for Republican Party Chair Reince Priebus before being tapped for the convention.

Longtime associates like Coleman describe Larson as someone with a steady hand but someone who would rather stay behind the scenes. They say that makes him suited to deal with a convention attended by some 15,000 reporters on the lookout for slipups and dogged by protesters just outside a vast security perimeter.

It also makes him suited to work with an unpredictable, unconventional nominee.

“Jeff doesn’t get flustered, that’s an important quality in this business,” said Chris Tiedeman, who’s worked around Larson for a decade and is part of Minnesota’s convention delegation.

“He runs a very tight ship and is just an excellent leader,” Tiedeman said. “I’m so thrilled he is running this convention. He’s does a fabulous job already with a challenging, challenging year.”

Larson, 54, is graying at the temples and he keeps his answers brief, in line with his unassuming style. He was born in North Dakota but made Minnesota his professional home base. He launched a consulting and telemarketing company based in Oakdale. He lives just across the St. Croix River in Hudson, Wis.

This isn’t the first time Larson has played a key but low-key role in staging a convention. In 2008, he led the host committee that landed and helped put on the Republican National Convention in St. Paul.

He snagged headlines that year when it was revealed he was involved in the pricey wardrobe shopping spree for newly minted vice presidential nominee Sarah Palin. The tab was put on his credit card though he was later reimbursed.

Larson was too busy for shopping this week as he moves from events to meetings and talks on the phone for much of the time in between. He’s so busy he didn’t have much time to talk about his role or himself.

Tiedeman, though, said this convention has put Larson in challenging circumstances.

In welcoming delegates on the convention’s opening day, Larson seemed to brush it off, even though he said later the final nails were being hammered just before the gavel fell.

“Take a moment and look around,” he said. “Here we are entering the finals in the selection process for leader of the free world. Like the team that won a championship in this arena, the Cleveland Cavaliers, our nominee will win this November.”

“So I’m going home,” he said, “sitting on my boat and cracking open a beer.”

BERLIN — A 17-year-old Afghan asylum-seeker who went on a rampage on a Bavarian train with an ax and a... read more