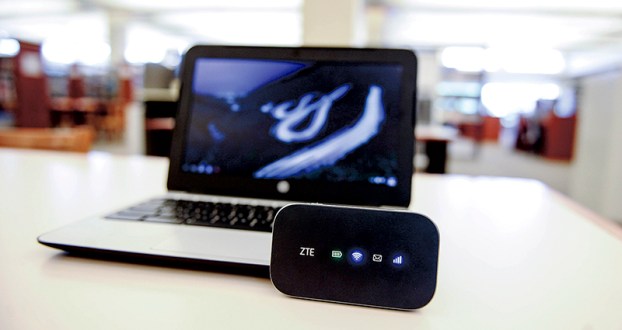 Portable Wi-Fi hotspots are ready for check out at the Austin Public Library.

The library rolled out a program with 55 Wi-Fi hotspots for checkout in January without much fanfare or promotion but the program has quickly become popular.

The program continues to grow after the Austin City Council unanimously voted in a Monday work session to spend $27,600 of contingency funds to buy an additional 30 T-Mobile hotspots, which people can check out at the library for short-term internet access.

Hotspots provide Wi-Fi internet access via local wireless internet networks, much in the same way cellphones use data. Generally, the hotspots are used by people who can’t afford internet and don’t want to invest in internet but want to try it out. 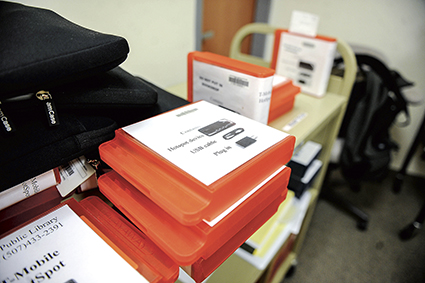 Portable Wi-Fi hotspots are ready for check out at the Austin Public Library.

“There is a lot of need in the community,” Fejedelem said.

Library Director Ann Hokanson agreed the hotspots are helping people in the community, as she told stories about students checking out the hotspots to do school projects at home instead of the library or having to stay late after school.

“Right now this is the need and this is an affordable way to meet it,” Hokanson said.

Fejedelem recalls being in library school about 15 years ago and hearing talk about bridging the digital divide and making sure everyone has access to the internet and the means to become a digital citizen. Though it took a while, he’s happy to finally see that happening.

“That’s pretty awesome because that’s a long time in the making,” he said.

Others will take the units on vacation to avoid roaming charges.

Fejedelem said the library can barely keep them on the shelves and they’re still on a first-come-first-serve basis.

“We’re not meeting demand yet,” he said.

As of July 6, the hotspots had been checked out 345 checkouts by 133 unique borrowers, according to Fejedelem.

Through the hotspots, an average 617 gigs of data is being used per month for a total of more than 3 terabytes.

“They’re being used,” he said with a laugh.

And people are respecting the technology, according to library staff.

The largest usage in a single month for a hotspot was 68 gigs, which Fejedelem called a sign people haven’t been using them to stream high-definition Netflix for several days.

None of the hotspots have gone missing or failed to be returned.

Many people check the hotspots out with one of the library’s 35 Chromebooks too, and Fejedelem was pleased with how well people have taken care of both the Chromebooks and hotspots, saying both have been very successful. And after hearing some horror stories from other areas, Austin hasn’t seen any damage or unreturned property.

“I’ve been quite pleased with the way they public’s been enjoying this program,” he said.

With the new hotspots coming in, Fejedelem hopes they may be able to make the reservable in the future.

The additional 30 hotspots will boost the library’s total to 85 by early August. Though the City Council still needs to approve the purchase in its next full meeting, it gave Library Director Ann Hokanson permission to purchase the units now because she can save money if she buys them in July.

For the initial hotspots, 25 were bought through The Hormel Foundation, 20 came from the Friends of the Austin Public Library, and 10 were bought with library gift and memorial funds.

The Hormel Foundation and friends the library have covered much of the data for the initial hotspot rollout. The library gets the hotspots through T-Mobile and is able to use their state government plan, which costs about $30 a month for unlimited data for each unit, which Fejedelem described as very affordable.

Hokanson aims to get 40 more through a federal grant, as her goal is to have more than 100 hotspots.

But Hokanson and Fejedelem described hotspots as a temporary fix, as they see the technology changing over time or Vision 2020’s GigAustin project potentially making for other internet improvements down the road.

In a world of upheaval, a simple gesture can go a long way. In the wake of a rash of... read more