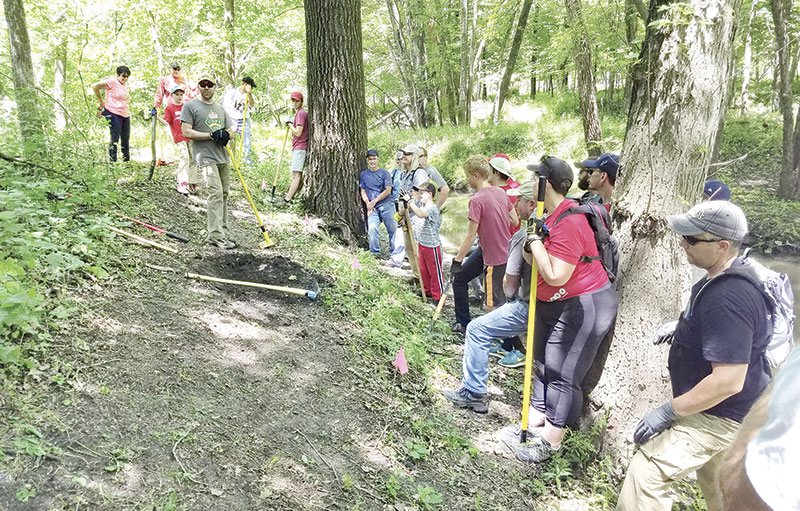 As crews neared completion Saturday on work to reroute a section of Austin’s mountain biking trail, it didn’t take much to see the continued buzz around one of Austin’s blossoming sports.

“We love mountain biking,” one man shouted along the trail. “It’s the coolest sport ever.”

The Southern Minnesota Bike Club hosted the International Mountain Bicycling Association’s Subaru/IMBA Trail Care Crew on Friday and Saturday for a discussion on how to build and maintain trails along with a hands-on seminar to work on Austin’s own mountain bike trail.

Things kicked off Friday with a meeting of community leaders at the Jay C. Hormel Nature Center, and Matt Andrews, IMBA’s associate regional director for the Midwest, was impressed by the people attending from various community organizations coming together around a common goal.

“The community, the stakeholders in the room yesterday, all the right people are in the room,” Andrews said. “It’s not just mountain bikers in the room. … A lot of community people were there, and that, I would say, is kind of Austin’s advantage right now.”

On Saturday morning, about 40 people attended an education session at the nature center on trail-building. In the afternoon, much of that group moved down to the mountain biking trail on land owned by Hormel Foods Corp. west of Todd Park, which was converted into a private trail for Austin’s mountain biking team in recent years. 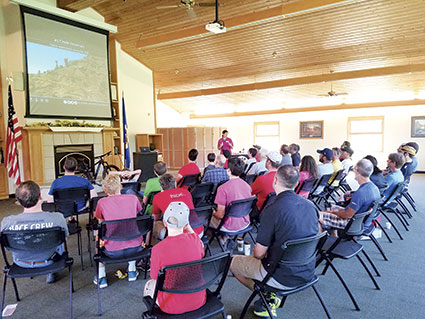 “To have the support of all the folks here today, it went very quick,” said Steve Kime, an SMBC member and chairman of the Vision 2020 Bike/Walk committee, on Saturday.

The Subaru/IMBA Trail Care Crew makes quite a few visits across the U.S. each year, but it aims to do about three to five visits each year in Minnesota and Wisconsin. Andrews was pleased with the local turnout, adding the weekend drew people from the Twin Cities, Rochester and from across Minnesota.

Kime said Saturday’s classes showed there’s a right and a wrong way to build a trail to make it sustainable and to allow for natural erosion to occur without too much wear and tear. He added a lot of that has to with how you cut the trail to help the water roll off.

“Planning was a key part of trail-building,” Kime said.

Though Austin volunteers built the bulk of the trail before holding such a class, Kime said IMBA’s crew was pleased with most of what was accomplished in prior years, though they pointed out a few areas of improvement.

On Saturday, crews hand-cut a little more than a tenth of a mile of new trail and reclaimed a similar distance of old trail back to nature. 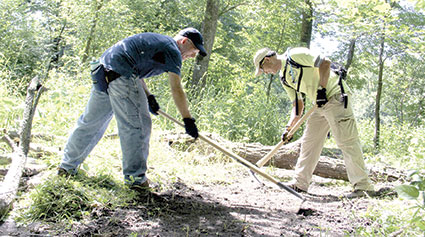 The weekend constituted another big step in the area’s own mountain biking presence that has seen the short and successful ride of its own high school team which will host its second race this September. The team, based in Austin, held its first race in only its second year, last September pulling in riders from around the state.

More work is ahead for the bike enthusiasts. Along with the second mountain biking race in September, Kime and other volunteers are working on an application for Austin to be designated a bike-friendly community. Kime admits the application is extensive, but the plan is to submit an application by Aug. 9 before learning if the application was accepted sometime over the winter.

“I think there’s a lot of support for it, I really do,” Kime said. “The city’s on board for it, and I think it can be nothing but good for the city.”