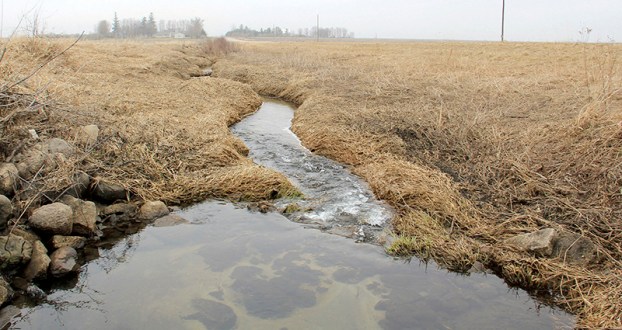 Dobbins Creek waters flow north along 610th Avenue in Red Rock Township southeast of Brownsdale. Though an estimated 94 percent of Mower County is in compliance for a buffer law passed year, SWCD staff will be contacting those landowners about non-compliant land in the coming months along with options for how they can correct it. -- Herald file photo

Minnesota’s buffer law will be the focus of a one-day series of informational meetings hosted Thursday by local and state agencies for a five-county area.

Buffer meetings, free to the public, are set for July 28 for the following: 9 a.m. to 11 a.m. in Fountain at the Community Center, 104 Main St., hosted by the Fillmore SWCD; 1 p.m. to 3 p.m. in Blooming Prairie at the Servicemen’s Club, 210 Fourth St. N.E., hosted by the Mower, Dodge and Steele SWCD offices; 5 p.m. to 7 p.m. in Albert Lea at the Fairlane Building in the Freeborn County Fairgrounds, 1031 Bridge Ave., hosted by the Freeborn SWCD.

“This is a great opportunity for farmers and rural landowners to learn more about the state’s buffer initiative — why it’s being done and how it affects their land,” said Justin Hanson, Mower SWCD district manager, in a press release.

Minnesota Farm Bureau, an organization that serves as an advocate for agriculture driven by the beliefs and policies of its members, is helping SWCD offices organize the meetings and is providing milk and cookies for attendees.

Last week, the Minnesota Department of Natural Resources — as part of the state’s commitment to protecting clean water — released its map of public waters and public ditches requiring permanent vegetative buffers or alternative water quality practices. Landowners and local governments can view the buffer map – online at www.mndnr.gov/buffers — to see where protective vegetative buffers of 16.5 feet or an average of 50 feet are required, as approved by the Minnesota Legislature in 2015 and revised in 2016.

“Vegetative buffers help filter pollutants and sediment out of our waterways,” said DNR Commissioner Tom Landwehr in a press release. “Completing this map is a critical step toward the ultimate goal of protecting one of our most valuable natural resources – clean water.”

BWSR, soil and water conservation districts, and local governments will work with landowners on questions about buffers or alternative water quality practices. A series of eight meetings with local government boards and staff will help coordinate the implementation process.

In 2015, the Legislature passed a law seeking to establish riparian, the area between land and a river or stream, buffers and water-quality practices to protect water resources from erosion and runoff pollution; stabilize soils, shores and banks; and provide habitat and riparian corridors.

Statewide, the law seeks to establish 110,000 acres of vegetative buffers of up to 50 feet along lakes, rivers, streams and ditches to help filter out phosphorus, nitrogen and sediment. The buffer width will be an average of 50 feet on public waters and at least 16.5 feet on public ditches. Private ditches no longer are required to be buffered.

The buffer initiative is a multi-agency effort involving the DNR, BWSR, the Minnesota Department of Agriculture and the Minnesota Pollution Control Agency, whose studies have shown that buffers are critical to protecting and restoring water quality and aquatic habitat due to their immediate proximity to water.