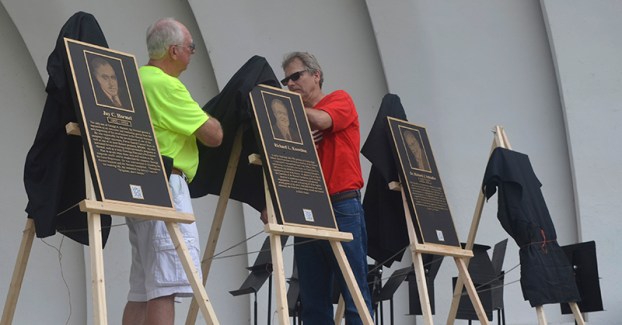 Steve Kime and Jeff Anderson unveil one of the Pillars of the City Monday afternoon in Bandshell Park. -- Photos by Alex Smith/alex.smith@austindailyherald.com

Austin unveils Pillars of the City

Five faces etched in bronze plaques were unveiled to a cheering crowd in Bandshell Park.

The Pillars of the City recipients were announced during Freedom Fest Monday afternoon to recognize individuals who have made Austin into the city it is today. The inaugural recipients were Dr. Dick Schindler, Dick Knowlton, George Hormel, Jay Hormel and Jon Erichson.

“This is the start of a long, great project,” Committee Chairman Steve Kime said. “I think this is something we can all be proud of.”

The recipients were each recognized for their accomplishments and impact on the community. 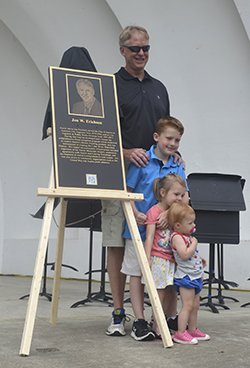 Jon Erichson, one of the Pillars of the City recipients, poses for a photo with his grandchildren Noah, Jade and Emmy Monday afternoon at Bandshell Park.

Although he was not expecting the recognition, Jon Erichson was honored.

“It was a great surprise, I totally got caught off guard,” he said.

Schindler’s daughter, Erin, accepted the award on his behalf.

“I wish dad was here to see this himself,” she said.

A committee of nine members appointed by Mayor Tom Stiehm were tasked with selecting five people to be chosen as Pillars of the City. Committee members considered nominations recognizing individuals, past and present, who have made significant contributions to improving the quality of life in Austin related to growth, economic impact, health, education, culture, recreation, communications, business or scientific innovations

“We had many nominations to choose from,” Kime said. “It was quite a process.”

The plaques will be displayed on Austin’s North Main flood wall in a few weeks. Each year, three more recipients will be selected. They plan to have 75 total.

“I found, just myself being involved, there’s a lot of history and I think it just brings a better connection,” Kime said.

There’s also a QR code linked to a full biography on the city’s website.

“I’m envisioning people strolling along North Main and thinking about the history of the people and Austin, and then looking for more information and that will be available on city website,” Kime said.

Pillars of the City selections

Dr. Richard John (Dick) Schindler served the Austin community as a family physician for nearly forty years. In the course of his medical career, he delivered more than 4,000 babies and was instrumental in creating the Mayo Medical Center’s education program for providers and caregivers. He was a recipient of the Minnesota Family Physician of the Year Award. A veteran of the US Air Force, he was an avid supporter of community organizations and activities, particularly bicycling, and was a founding member of the Austin Cycle Team.

A native Austin and 1950 graduate of Austin High School, Richard L. (Dick) Knowlton served as a member of the Hormel Corporation’s management team from 1956 to 1995, culminating in a fourteen-year tenure as Chief Executive Officer during which he steered the company through the most tumultuous period in its history. In addition to serving as the Chairman of the Hormel Foundation, Dick was also involved in numerous community and national organizations. As well as receiving all of the highest awards given in the retail, food distribution and meat industries, the Knowlton Innovation Award was created in Dick’s honor.

George Albert Hormel founded the company that would grow to become Hormel Foods Corporation in Austin in 1891. Born in New York in 1860, George moved to Minnesota and settled on Austin as the place where he would start his business. Writing to his parents in 1887, he said, “I am sure of success at Austin.” With an insistence on cleanliness and an attention to detail that was unique at the time in the meat-packing industry, he quickly established an unparalleled reputation for quality that carried the company through some serious challenges in the early years. By the time of his retirement in 1927, the company he had created was an industry leader.

The only son of George A. Hormel, Jay Catherwood Hormel gained a reputation as an innovator and marketing genius from the very beginning of his involvement in the Hormel business. He was responsible for the development of one of the company’s major successes, Flavor-Sealed Canned Ham, as well as one of its most famous products, SPAM. Jay also instituted forward thinking employee-benefit programs at Hormel, such as a Joint Earnings Plan and a Retirement Plan in an era when those were still rarities in the corporate world, and he shepherded the company through the Great Depression. Throughout his working life, Jay embodied his grandfather’s advice: “Originate, don’t imitate.”

Austin native Jon Erichson served the City of Austin as Assistant City Engineer from 1979-1992, and as City Engineer & Public Works Director from 1992-2013. During that time he developed and oversaw the comprehensive flood mitigation program which undertook to resolve Austin’s chronic flooding problem, and was also instrumental in creating the Cedar River Watershed District. His impact on community infrastructure included expansion of the Austin Municipal Airport, annexation agreements with Austin and Lansing Townships, and development of Austin’s comprehensive trail system. Jon was also active in community organizations, the United Way, and Austin youth athletics.

Jordan Gerard contributed to this report.