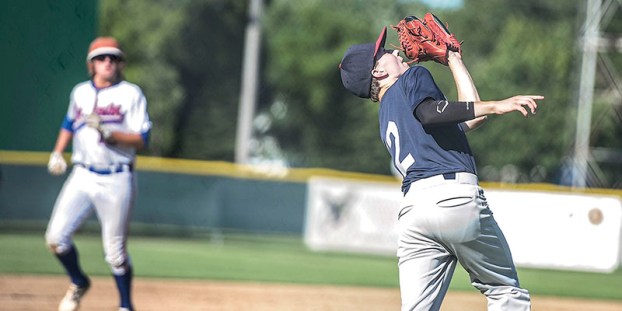 Forrest Lewis pulls in a popfly in game one against the Rochester A’s at Marcusen Park Tuesday night. Eric Johnson/photodesk@austindailyherald.com

The Austin Post 91 Legion baseball team closed out its home regular season schedule in dominant fashion as it brought plenty of pitching and hitting in a sweep of the Rochester A’s in Marcusen Park Tuesday.

Alex Ciola pitched a shutout in game one as Austin won 7-0 and Jason Stoulil pitched five and 1/3 shutout innings to get the win in a 12-4 victory in the nightcap.

Ciola walked six, but he allowed just four hits in his win and Stoulil allowed just two hits and he hit one batter. 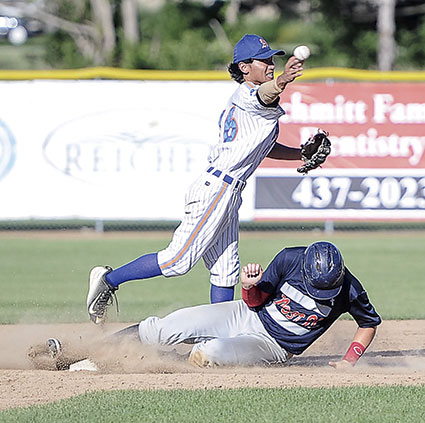 “To pitch around the walks without giving up runs says a lot. [Alex] was hitting spots and he set the tone for us in that game,” Austin co-head coach Andy Swank said. “Forrest Lewis didn’t pitch bad. That first inning there were a couple of unearned runs and that makes it tough for a young kid. That’s why I made the change and Jason came in and did a very, very nice job.”

Ciola has matured on the mound throughout the year and he’s starting to look forward to getting a chance to pitch in big games.

“I struggled with the walks, but I bounced back and threw strikes,” he said. “I had a terrible beginning in the spring and a little bit of the summer, but I’m finally getting that mojo back and I’m throwing good again. I want to pitch and I’m ready to go.”

Austin (14-5 overall) racked up 19 hits between the two games and Nate Conner provided a bulk of the firepower. Conner, who was batting in the No. 4 spot in the order, went five-for-six with three triples, a double, four RBIs and four runs. Dylan Gasner also gave a lift when he launched a two-run homer to put Austin up 5-4 in the nightcap.

“I changed my approach. I want to look for the ball down instead of chasing it when it’s up,” Conner said. “I was getting the ball right where I wanted it. The change in approach worked.”

Austin will play a doubleheader at the Rochester Patriots 4 p.m. Thursday to close out its regular season and it will likely host a District playoff game July 19.

While Austin’s lineup has produced during its current six-game winning streak, Swank said the team has potential to be even more productive.

“It’s kind of funny, because we still feel not everybody’s clicking at once,” Swank said. “When a couple of guys are slumping a couple other guys are swinging, but that’s what having a good team and a good lineup does for you.”

The 6th Annual Seth Pack Golf Classic will be held Aug. 5 at the Oaks Golf Course in Hayfield, starting at 11 a.m. The set-up is a 4-person scramble. There... read more