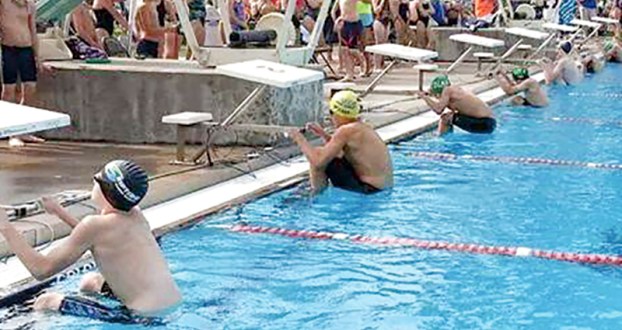 Swimmers get ready for the start of a race during an Atlantis Swimming Federation meet. The ASF will host a meet this weekend. -- Photo provided

Austin pool hosting swim meet this weekend; 1 of 4 meets in state this year

Some of the best swimmers in the state of Minnesota will compete at the Austin Municipal Pool this weekend.

For the first time, a Minnesota Regional Championship will be held at the pool with an estimated 450 swimmers coming to town for sessions from 6:30 p.m. to 11 p.m. Friday and 8 a.m. to 5 p.m. Saturday and Sunday.

The meet is one of four USA Swimming Federation regional meets being held in Minnesota this weekend and it will also serve as a state qualifier. The Austin Municipal Pool has hosted a few smaller meets to prepare for the regional meet and it’s going to be full of swimmers for three days now.

“We have been working extensively with the Park and Rec staff to get everything set up,” said Mark Viniski, the founder and owner of Atlantis Swimming Federation, who helped get the meet to Austin. “They’ve been fantastic and I think Austin has some of the best Park and Rec staff in the state.”

As part of hosting the meet, team Atlantis was able to get an $80,000 grant to get eight new swimming blocks and 13 new lane lines. Viniski, who discovered the Austin Municipal Pool last summer, said it it is a great host site for the meet because of the quality of the pool and the location.

“The nicest thing about the Austin pool is it is downtown and I believe it is the best outdoor pool in the state of Minnesota. We’re going to fill it up and I want my swimmers going downtown and go to the pizza joint or the shop,” he said. “I think this a great opportunity for Austin and for the state.”

A total of 12 teams will compete in the meet and Austin will be represented with some local swimmers as well.

Viniski said the event is free of charge for any fans attending and there will be concessions available.

Sale to be held for surplus materials at Brownsdale school

With the former Brownsdale school sold to the city of Brownsdale, Hayfield Community Schools is getting ready to sell off... read more