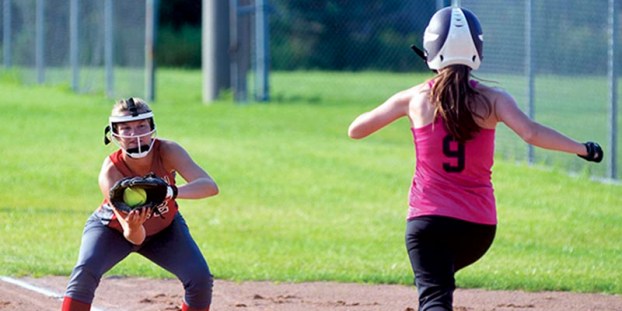 Austin’s Tori Garnder pulls in a throw at first base against Dover-Eyota in Todd Park Monday. Rocky Hulne/sports@austindailyherald.com

Austin 16U softball team uses speed in sweep of Dover-Eyota

When Austin 16U softball outfielder Adison Medgaarden tracked down a fly ball in right field and made a running catch to take away a base hit towards the end of Austin’s sweep by scores of 14-2 and 10-0 of Dover-Eyota, she was happy but not thrilled. 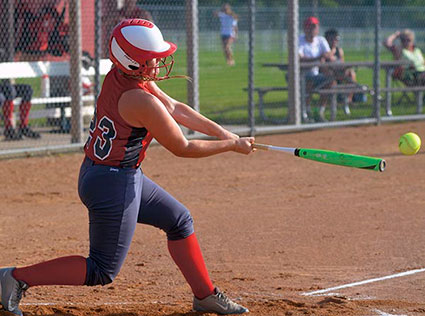 Caitlin Kaercher lines a base hit for the Austin 16U softball team against Dover-Eyota in Todd Park Monday. Rocky Hulne/sports@austindailyherald.com

That’s because Medgaarden, who also had a huge day at the plate for Austin in Todd Park Monday, is still looking to get a chance to make a diving catch. Her coach Dan King said he has a tough time getting her diving chances in practice, due to her speed and ability to read a ball quickly.

“I want to try diving, but I don’t really have that many opportunities for it I guess,” Medgaarden said.

“If I do bad it gets in my head, but once I keep getting on base, it makes me want to keep going,” Medgaarden said. “I want to be aggressive [on the bases] and I want to be as aggressive as I can. The more you play, the easier it is to find out when you should run.”

King said he likes his team to run hard on the bases and he was glad with what he saw out of his squad against DE. 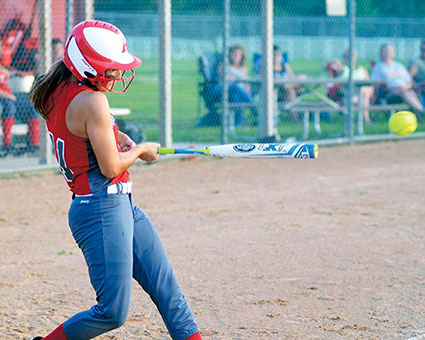 “When I coach I’m super aggressive on the base paths and they know that,” King said. “We’re always going to steal on the first or second pitch and we did a lot more hit and runs today. We took an extra base four or five times and I like to see them recognizing a situation and take advantage of it.”

Halie Retterath also had a solid day at the top of the order for Austin as she went three-for-four with two stolen bases and five runs scored.

“I’m always playing as hard as I can,” she said. “This summer has definitely been a great help with us playing together.”

Austin is now tied for the lead in the Southern Minny and it can win the title if it picks up three wins against the Venom in Todd Park Wednesday. Austin will finish a game that was delayed by weather at 6 p.m. with the Venom and then it will play a doubleheader against them. 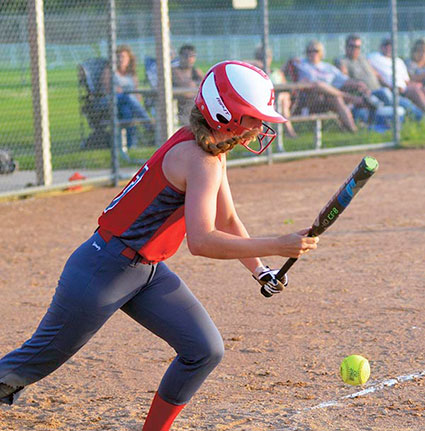 King said his team has made a big push this summer and the team could have bright future with the Austin Packer varsity team in the spring.

“With the pitching and fielding, and all of them playing together they have a lot of potential,” King said. “When they’re a team, they’re a really tough team team to beat.”