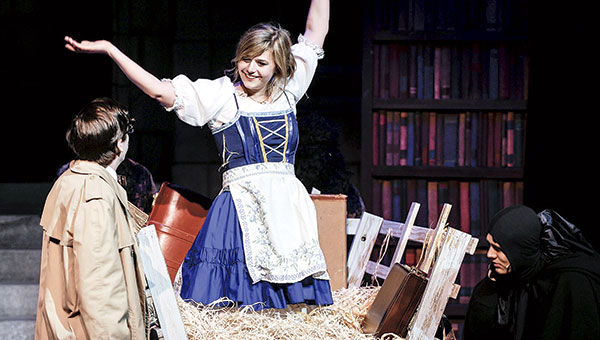 Riverland Community College is gearing up for its last play this season with the Broadway musical “Young Frankenstein.”

The play follows Frederick Frankenstein, grandson of the infamous Victor Frankenstein, who inherits his family’s estate in Transylvania. With the help of a hunchbacked sidekick and a leggy lab assistant, Frederick finds himself in the mad scientist shoes of his ancestors as he brings to life a creature to rival his grandfather’s. Eventually, the monster escapes and hilarity follows.

Relevant to audience members who will remember the original film as well as to newcomers, “Young Frankenstein” has all the panache of the screen sensation with a little extra theatrical flair added.

The show is suggested for ages 13 and up. 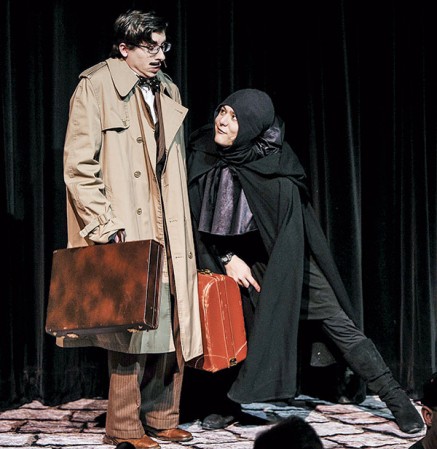 Igor, played by Garrin Loveland, picks up Dr. Frederick Frankenstein, played by Peter Hoffman, from the train station during rehearsal for the Riverland Theatre production of “Young Frankenstein.” Eric Johnson/photodesk@austindailyherald.com

Hansen said the play is mean to be in the exact style of the movie.

“Some of the [actors] were very unfamiliar with the film, so we made a point at the very beginning to make sure that everybody watched the film,” she said. “That we want the characters to be like they are in the film, and the actors have really embraced that bringing those characters to life onstage.”

“It’s been a really great challenge for them and I think they’re having fun,” she added.

Hansen said the play is one of her favorites, to the point she memorized many of the lines.

“It makes me laugh, it’s a great classic, and it became a successful Broadway musical a few years ago,” she said. “And it ran for quite awhile so we thought we’d do it here.”

“Mel Brooks’ film ‘Young Frankenstein’ is a comedy classic,” said Riverland Theatre Director Lindsey Duoos Williams in a press release. “The American Film Institute named it one of the funniest American films of all time. The musical does a great job of capturing all of those hilarious moments from the movie, and then adds even more laughs with its clever songs. I think our audience members who enjoyed “The Producers” several years back will really like this show.”

Set designer Mark Spitzer faced a challenge creating a Transylvanian castle on the stage of the Frank W. Bridges Theatre. Spitzer worked in partnership with the Riverland Art Department to locate a castle set created for a short film titled “The Frank” by Trace Beaulieu. The set was designed by David Weiberg and built by MNFX. Riverland’s Truck Driving and Diesel Technology departments assisted in transporting the castle set to Austin from the Twin Cities.

“The set for Young Frankenstein is exceptional,” Williams said in the release. “Through this partnership with other Riverland programs, we were able to acquire a beautiful set that exceeds what we are able to build here at our facility. Mark has done an excellent job adapting it to our stage, and I think our audiences will be very impressed.” 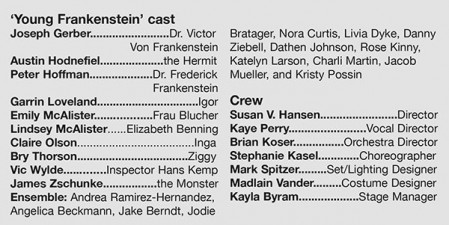 The show ends the 2015-16 Riverland theater season, and Hansen said it’s a good show to end with.

“We like to do a bigger show at the end, something bright and fun usually with a bigger cast,” she said. “There’s a lot for the ensemble to do in the show. There are 23 cast members plus our orchestra. And it’s just a nice way to end the year, jump into summer.”

Hansen hopes the audience will see a familiar show they will enjoy, or find a new one.

“Hopefully if they’re fans of the movie, it will sound very familiar to them and make them laugh,” she said. “And if they’re not hopefully they’ll become fans and go out and watch the movie. But it is very funny and the actors are really doing a great job bringing that onto the stage.”

Individual tickets to Young Frankenstein are $16 and currently on sale at www.riverland.edu/tickets. Tickets may also be purchased at the Riverland Box Office, located in room E107 in the East Building of the Austin campus. Box office hours are Monday through Friday, 11 a.m. to 1 p.m. and one hour before performances. Riverland students receive two free tickets to each performance with a valid student ID. Contact the box office at 507-433-0595 or by emailing boxoffice@riverland.edu.