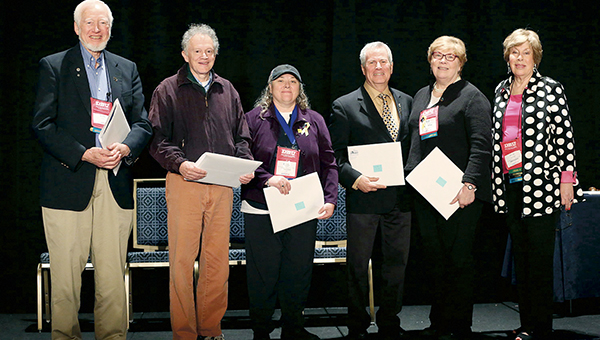 A former professor received a big honor recently for her work in Phi Theta Kappa at Riverland Community College.

Sue Grove was one of 13 advisors named Advisors Emeriti by the Phi Theta Kappa Foundation. Grove and the others were recognized during the Association of Chapter Advisors Luncheon at Phi Theta Kappa’s 2016 annual convention in National Harbor, Maryland, April 7-9.

“I’m unbelievably thrilled to have been chosen,” said Grove, a former professor at Riverland Community College.

Established by the Phi Theta Kappa Foundation, the Advisor Emeritus program includes a select group of retired or retiring advisors who, after providing extraordinary leadership and achieving success, are invited to continue their engagement and support of the Society based on their interests and expertise in Phi Theta Kappa’s programs.

Grove got involved when she was coming up to retirement and the Phi Theta Kappa at Riverland couldn’t find an advisor, so they were thinking about closing the chapter. She, along with two other women, stepped up.

“And then I started discovering what was involved in Phi Theta Kappa,” she said. “After I retired, I came back and taught so I could stay an advisor,” she added with a laugh.

Recipients must be nominated by a Phi Theta Kappa headquarters staff member. Then, an Advisor Emeritus Nominating Committee makes an annual recommendation to the Phi Theta Kappa Foundation Executive Committee for approval, and an announcement is made at convention each year. Grove was nominated because she’s been in the organization over five years, has been an advisor, and has been involved locally and at the international level, as well as served as a faculty scholar. She advised any student to join.

“It’s a thrill because the organization is so [great] for students,” she said. “Even if they don’t get money, the opportunities they are awarded, it’s mind boggling, seriously.”

She recalled one student who’s whole life changed after a week long honors program, where he came out of his shell and instead of being as shy as when he started, he ended up the graduation speaker. He also changed his major because of the experience.

The Lyle-Pacelli softball team lost 26-6 to Blooming Prairie in the Austin Elks tournament Saturday. The Athletics led 2-0 after... read more