‘Cheating gravity’ – Local bicyclist rolls out on a new adventure 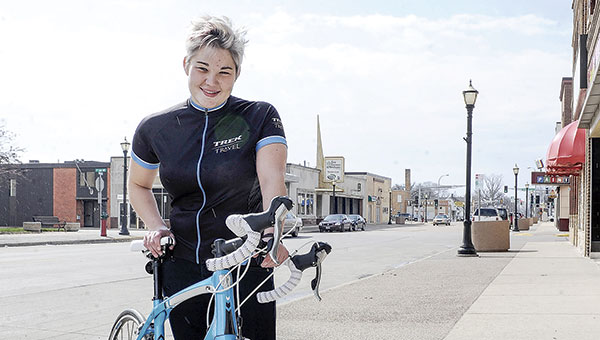 Grace Heimsness will soon begin a job as a bike tour guide with Trek Travel in Utah.
Eric Johnson/photodesk@austindailyherald.com

Grace Heimsness isn’t afraid of taking off across the country on two wheels toward a new adventure.

Heimsness, 26, will leave April 26 for Utah to work with Trek Travel, a bicycle vacation company that offers guided bicycle tours all over the world. She will be stationed in Bryce and Zion National Parks before driving up to Crater Lake in Oregon through the end of August, and will return to Utah through Thanksgiving when the season ends. After that, it’s back to Austin.

“I’ll come back and hang out a little bit,” she said.

Heimsness will work as a guide, which means she is a riding buddy, bike support, someone knowledgeable about the tour area, a mechanic, and someone skilled in first aid and CPR, among other things.

“You’re kind of going out of your way to give people something to remember,” she said. “As a guide I’m not only riding along with the guests, going to dinner with them and hanging out with them — basically you’re hanging out with them on vacation. But you’re also making sure that their needs are being met before they even think to ask. So a guide is the ultimate host, you just happen to be riding a bike.”

Heimsness found out about the job through a brochure.

“I picked up a Trek Travel brochure — gosh it was probably like two or three years ago — and sat on it for awhile.”

She submitted her application in December, then went through a video interview, then a full-day hiring event, then a 10-day training, and finally she found out she had gotten the job. 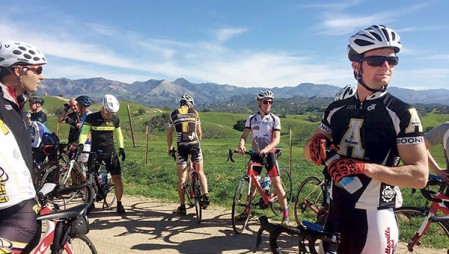 “It was crazy, it was probably one of the craziest things I’ve done in terms of taking risks and not knowing what you’re doing,” she said. “And I really had to just kind of jump in and have that sort of faith where it’s like, ‘Well what have you got to lose, the worst they could say is no.’”

She first got into biking with her dad, who convinced her to try a road bike, though her eighth-grade stubbornness thought she should mountain bike.

“Bless my dad, he got me onto a road bike and I took a lap in the parking lot behind the shop, and it took me like five seconds to break down and be like, ‘Ok this is pretty cool,’” she said. “Because you get on a road bike and you’re just floating … it’s almost like you’re cheating gravity when you’re riding a bike.”

Heimsness said not only the world, but people are best seen from the seat of a bicycle. She explained complete strangers can walk up to a set of bikes, but once they are riding it’s easy to start talking.

“It’s like anything else on a bike, it just kind of rolls,” she said. “And you kind of come to understand people in a way you can’t understand them otherwise, which is kind of cool.”

As for now, Heimsness is excited to travel to her new adventure. 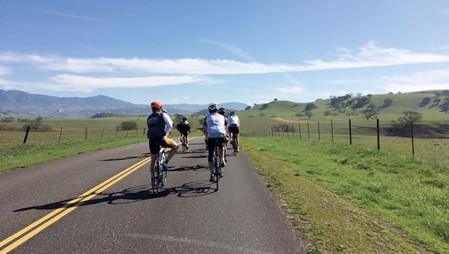 “I’ve never been to either place and I’m super excited about both of them,” she said. “I did my fourth-grade state project on Oregon, and I’ve still never been there, so I’m really looking forward to it.”

For now, spinning in the basement has served as a way to prepare for the ride, among other things. Throughout her excitement, Heimsness is nervous about the unknown.

“I’ve been having dreams about riding my bike off of a cliff,” she laughed.

“The fact that I’m going to go back and actually do this — sometimes it feels real and sometimes it doesn’t,” she added.

Though she is excited for her new adventure, Heimsness is also sad to leave friends and family behind. Since moving back to Austin after college in 2011, she has worked in many areas, including as a substitute teacher, a hockey coach, a mechanic, a bartender and more. Her most recent position has been at the Austin ArtWorks Center, where she started in May 2014 as an intern. She recalled helping start the ArtWorks Center and get the ball rolling.

“The things that we’ve been able to pull together … it’s going to be kind of weird to leave it because I helped — in a very small way — helped bring these things to life, and I hope that people appreciate them,” she said.

“It’s kind of like, it’s not my baby but I helped raise the baby,” she added. “So I’m kind of leaving our baby to [the community] to take care of.”

While sad to leave, Heimsness said she doesn’t foresee getting tired of her new job with Trek Travel anytime soon.

“Not only is there a huge opportunity to travel to different places and be meeting all these amazing guests along the way, and your co-guides, there’s just so many people to meet and so many things to see, and I’m so passionate about bikes from the ground up … that I don’t see myself getting sick of it any time soon,” she said.

Heimsness will write a vanishing travel blog at graceheretoday.com for anyone interested in seeing what she is up to on her new adventures. She thanked the community for all the support they have given both her and the Austin Area Commission for the Arts.

“I feel fortunate to have grown up here,” she said. “I know sometimes it gets a lot of flak, Austin does, but I really want to say thanks to everyone.” 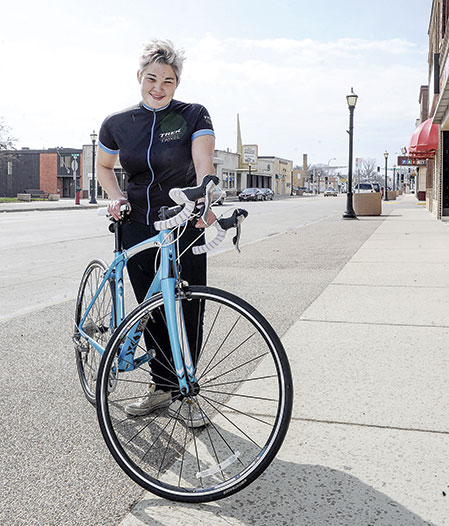 Grace Heimsness will soon begin a job as a bike tour guide with Trek Travel in Utah.
Eric Johnson/photodesk@austindailyherald.com