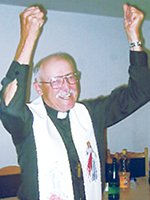 Ruben C. Spinler was born to Stanley Spinler and Anna Spinler nee Kubichek on Oct. 31, 1928, as the fourth of six children. Ruben grew up on the farm and learned practical mechanics and construction skills from his father. He then graduated from Blooming Prairie High School in 1946, and served in the Army during the Korean War, based in Japan. On Sept. 3 1952, Ruben married Margaret Jirele and took over the home farm. He also worked a number of other jobs to help bring in income, such as installing cabinetry and appliances, or doing roofing. He and Margaret had five children, who they raised with frequent visits to and from cousins, uncles and aunts.

Ruben also stayed closely involved with the community. He served on the Blooming Prairie school board for many years, served on the Steele County Soil Conservation board, and helped continually at Holy Trinity church and St. Isidore’s school doing maintenance, snow blowing, and the like. Ruben lost his beloved wife Margaret on Nov. 3, 1978, to leukemia, but continued to raise his children and farm until the all of them were at college or in other careers.

During a pilgrimage to the Marian apparitions in Medjugorje, Yugoslovia (now Bosnia and Herzegovina), Ruben was inspired to investigate the priesthood. His eldest son, Michael, was able to take over the family farm, the Diocese of Winona was able to sponsor Ruben to the Sacred Heart Seminary in Hales Corners, Wisconsin, and on June 15, 1994, Ruben Spinler was ordained as a Catholic Priest of the Diocese of Winona.

A funeral mass will be 12 p.m. Friday, March 18, 2016, at Holy Trinity Catholic Church, in Litomysl. Friends may greet the family from 4 to 8 p.m. Thursday, March 17, 2016, at the Brick – Meger Funeral Home (1603 Austin Road, Owatonna) and one hour prior to the funeral mass at church. Interment will be at the church cemetery. There will be a rosary recited on Thursday at 3:45 p.m. at the funeral home. For more information or to leave an online condolence message go to www.brick-megerfuneralhome.com.