Austin primed for a new future 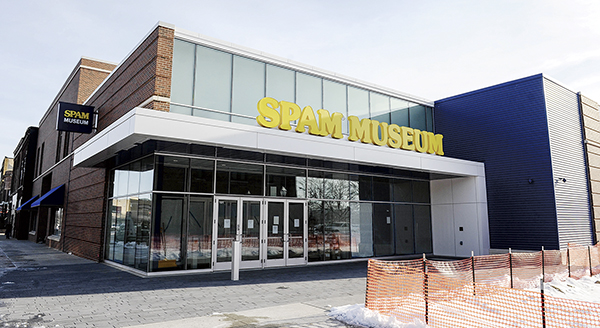 Austin is on the cusp of major changes to the community’s two largest retail hubs.

The changes are the sort that towns rarely see — and even more rarely see at the same time.

In downtown, a new Spam Museum will open in a few months on Main Street between between Second and Fourth Avenues. 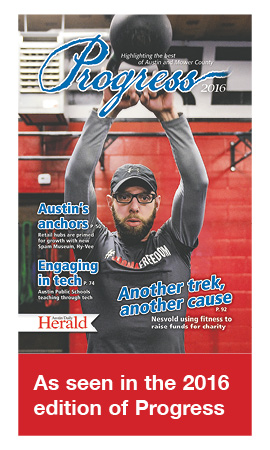 Then on 18th Avenue Northwest, Hy-Vee acquired Oak Park Mall last November with the help of a $3.65 million Hormel Foundation grant and help from the city. The company is in the early stages of demolishing the former Oak Park Mall to make room for a new grocery store, which is expected to open in early 2017.

As someone who’s lived in Austin for about nine years, Hy-Vee manager Todd Hepler sees the store as something that will attract both shoppers and perhaps other retailers to Austin.

“I think it’s going to change the entire retail outlook for Austin on 18th,” he said.

Now big box stores and corporations have absorbed a large portion of the market, and many of those are located on the edge of communities in places like 18th Avenue Northeast, which Forstner says largely started in the 1980s.

“Downtown remains the center of your town,” he said. “You might have more square footage and more sales out at 18th Avenue, but [downtown] remains the heart of our community.”

Forstner credited Austin’s Main Street Project with helping renovate more than 40 storefronts downtown from 2005 until it completed in 2014.

“If you look at our downtown area, you’ll see a very vibrant retail area,” Forstner said. “Particularly when you compare it to other main streets across the Midwest and the country, we have a strong downtown.”

But it’s been several years since downtown Austin boasted a true anchor — something that draws people. Now, the Spam Museum is expected to attract thousands of visitors each year.

“I think it’s going to really change the face of downtown, at least for a number of years” Forstner said.

But the hope is that it won’t just be the Spam Museum that benefits. The hope is that other downtown businesses — restaurants, coffee shops and retailers — will benefit from the increased traffic.

Vision 2020’s Destination Downtown Committee and downtown merchants have discussed ways to capitalize off the increased traffic from the museum.

Forster also sees the location as a beneficial spot for the museum too, as tourists will be able to enjoy other community amenities more easily.

“I think it will be a much better experience for the tourist as well,” he added. “That’s a big deal right there.”

The museum opening will come in grand style too. A soft opening in spring for the Spam Museum’s grand opening will be during Hormel Foods Corp.’s 125th anniversary celebration, which Forstner said will put the spotlight on Austin in a positive way through much positive PR and economic activity. The Band Perry is set to perform at a July 29 celebration on the grassy space north of the Mower County Jail and Justice Center right by the new museum.

Forstner expects the celebration will likely help everyone from the hospitality industry to the retailers and tourist attractions around town.

The Spam Museum move also opens up more Hormel corporate space for the company at the old site beside the south corporate offices.

Plus, Forstner said downtown has another economic and employment anchor in the Mower County Government Center and Mower County Jail and Justice Center, which together employ more than 200 people.

Though Forstner calls downtown the heart of Austin’s retail community, 18th Avenue Northwest has grown into anchor in itself.

In fact, Forstner said Hy-Vee is arguably the largest retail draw in Austin, and a new, marquee grocery story will be a benefit to the community.

“I think the Hy-Vee projects a very positive development for 18th Avenue,” Forstner said. “I think it fixes a retail problem we’ve had for a number of years.”

Hepler agreed, noting the move will replace something many saw as an eyesore with something new.

The store, Hepler says, will make for something that makes Austin and the store look like a destination, as the store will be one more commonly associated with towns like Rochester or Des Moines.

“It will look like a town that’s vibrant,” he said.

Similar to the Spam Museum, Hepler sees Hy-Vee serving as an anchor for 18th Avenue. And it will be a destination drawing people to town to not only buy groceries, but to get other services too.

“It’s really going to draw a lot of people back to Austin to do all of their shopping,” Hepler said.

“They do tremendous volume,” he said. “People come from northern Iowa to go to our Hy-Vee. With this new store, that will increase.”

New and enhanced departments will only boost Hy-Vee as a draw. The store will feature a doctor and a drive-thru pharmacy. The marketplace fresh grill will also bring a large restaurant, and a bigger liquor store will bring far more items people couldn’t previously buy in Austin.

The store will bring a larger health food area, an international food section for Austin’s diverse population, a place to buy bulk food, and a large restaurant. The store will also feature a new department dedicated to the quickly-growing area of online buying, along with options to buy dishes, detergents, paper towels and soaps, which aren’t normally associated with a grocery store. Hepler said the store will also feature a gathering space where people can prepare meals for an entire week.

Hepler said the store will present a positive image for Austin as a community with many positive things happening, which could boost retail.

Along with a new store front, Hy-Vee has already done work to improve the parking lot, which had been a point of public contention for many years. Forstner added stores lining the parking lot will see benefits as well, and they could also see the volume increase in their stores.

Hepler previously estimated the new store will propel Hy-Vee’s employees from 365 to 575 or 600.

Looking to the future

While he says Runnings has been a major addition in the former Kmart store, Austin lost its Staples in 2014 and Target in early 2015.

The Target space is one that’s especially difficult to fill, but Forstner said they’ve reached out to potential tenants.

“There’s some work to do on 18th Avenue,” Forstner admitted.