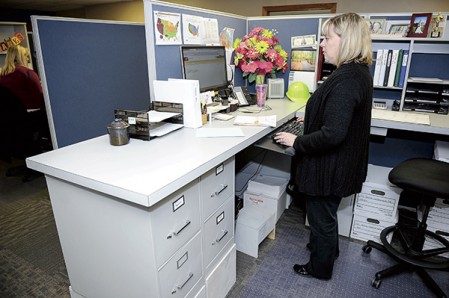 On a quiet day a few months ago, Elizabeth Flatt worked at her tidy, L-shaped desk behind cubicle walls on the second level of IBI Data in Brownsdale.

Though a day like any other on first appearance, Flatt was one the most recent converts to a growing trend of people using standing desks, and she stood typing at her desk in front of a high-raising chair. While people like Flatt and IBI Wellness Coordinator Sherry Anderson choose to stand for a variety of reasons, the desks have gained in popularity largely because several studies show prolonged sitting can contribute to many long-term cardiovascular conditions.

Anderson is thrilled when she walks around the office to find more people standing as they work.

Anderson was one of the first to use a standing desk at IBI. She’d read up on them while reading up on things for the wellness committee. IBI now has at least eight standing desks.

“I love it and I’m glad to see that other staff are starting to utilize stand up desks,” she said.

But IBI workers aren’t alone in getting on their feet, as the trend is picking up around the area. Many at the Soil and Water Conservation District and Cedar River Watershed have switched to adjustable standing desks where they can sit or stand during the day. SWCD District Manager and CRDWD Administrator Justin Hanson says being able to stand up and move around helps him concentrate. 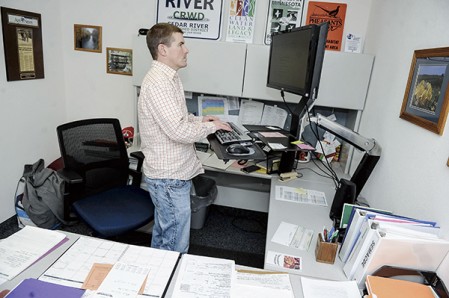 “I think I’m more productive when I’m on my feet,” he said.

“It certainly didn’t cut into your production at all,” he added.

Flatt switched over for similar reasons.

As a program specialist, Flatt moves around often to pick up printed materials, and move papers around her desk, so a standing desk is more convenient.

“That’s one of the reasons I like it,” she said.

Dr. Timothy Rietz admits that even doctors find themselves sitting for long periods, especially with the amount of data entry involved in the job. That’s one reason he recently requested at standing desk at his office at Mayo Clinic Health System in Austin.

Wellness is important, he stays, but it doesn’t always have to require complex changes.

Rietz referenced studies that link sitting for long periods to a range of health concerns like obesity, high blood pressure and a host of cardiovascular issues. Computer use during the workday is a major concern, but a Mayo Clinic study found a roughly 125 percent increased risk of cardiovascular disease for adults who logged more than four hours a day on computers and televisions.

Anderson switched to the standing desk more for health reasons. After working at IBI more than 20 years, she got tired of sitting for eight to 10 hours a day and had read health studies about the benefits of standing versus sitting.

“I didn’t want to have to sit all day anymore,” she said.

Even with studies showing that standing desks help long-term health, many who use them found short term benefits. For Hanson, standing more helped with his circulation issues, since standing has always helped keep his feet and hands warm enough to stay comfortable. Hanson also runs recreationally and has run a few half or full marathons, and he said the option to stand is beneficial when he’s training.

“You feel like working your legs and muscles for a little bit when you’re training,” he said.

Flatt found it’s alleviated back pain. One of the first IBI workers to get a standing desk, Flatt got it because she had a bad back.

“It keeps your energy level up,” she said. “When you’re sitting all day, your posture slumps. You just get more relaxed. Standing up, you are just a little bit more aware of that.”

Search on for sex offender: Known to have ties to B. Prairie and Hayfield