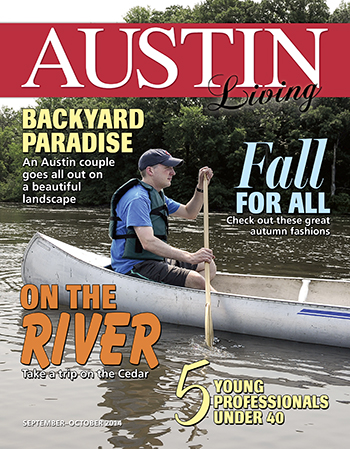 Austin Living magazine, which is produced by the Herald, took third place with its September-October 2014 edition in the Best Magazine category, which includes all daily newspapers in the state.

“These guys know how to put out a great magazine,” a judge wrote. “Very well layed out. All photography is high quality, excellent design elements used throughout.”

The Herald won third place general reporting for dailies under 10,000 circulation, and it also took third for typography and design.

For individual awards, Photographer Eric Johnson took second with his sports photo for dailies under 10,000 circulation for an image of Bruins goalie Evan Smith laying in the crease after the Minnesota Wilderness’ game-winning goal in the fourth overtime in game one of the Robertson Cup championship series in Riverside Arena.

“Wonderful photo depicting the thrill of victory and the agony of defeat,” a judge wrote.

Sports Editor Rocky Hulne took second in the Sports Story category for dailies under 10,000 for the Aug. 9, 2015, feature on players of African descent and their role on Austin High School’s boys basketball program.

A judge praised the story as well rounded and well written, adding it gave the readers “a glimpse into more than just what is seen on the basketball court.”