Investigation continues; 2 taken into custody as authorities continue looking into fight at AHS 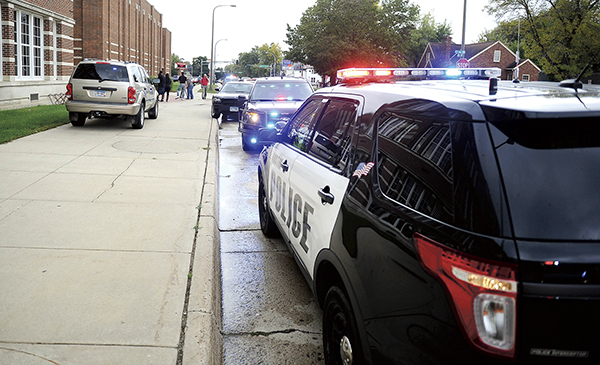 Austin High School Students returned to class Tuesday morning with added security measures in place after a fight broke out and a gun was reported — though never confirmed — outside the school Monday afternoon.

Monday’s incident started when AHS’s liaison officer heard screaming and found a large gathering of students screaming and yelling. Austin police and Mower County deputies responded around 3:15 p.m. to AHS after the fights and a report of a suspect with a gun near the school’s west entrance.

The school went into lockdown from 3:23 to 4:02 p.m. Though witnesses reported one person had a gun, no gun was ever found.

“A witness stated someone had a gun,” Austin Police Chief Brian Krueger said. “We tracked down the individual but he had no gun on him.”

A witness told the school liaison officer a 27-year old black male who was standing outside the school had a gun, and the suspect was chased by officers along the north and then west side of the school near the AHS Annex building. The man was taken down by gunpoint, but officers found no weapons on him. They searched the area and found a set of black, shiny nun-chucks on the roof of the annex, which officers believe he threw there when being chased.

The suspect was taken into custody, interviewed and later released. Krueger said there was no evidence the man was ever inside the school.

A 14-year-old female was maced and taken into custody, charged with obstruction, but no one is currently in custody.

The liaison officer said several people were injured and Gold Cross responded, but police did not know about the injuries as of press time. According to the complaint, officers tried to render aide to students who were injured but ran into chaos as students pushed forward against officers.

Krueger said police are still investigating and officers and school officials will be looking over the school’s video surveillance to determine where the fight started and to get more information about the identities of those involved.

Austin Public Schools Executive Director of Education Services John Alberts also said there was no gun, and he commended the school’s liaison officers for his handling of the situation.

“The liaison officer, when he responded, had heard a report of a gun being involved,” Alberts said. “So for the safety of the students he responded the way he should have.”

Krueger agreed the liaison officer responded well to the incident.

AHS was in lock down for 30 to 35 minutes before the school was declared safe and students were permitted to leave.

Rosa Recio was outside the school with her fiancé Robert Finch waiting to pick up her three nieces shortly after the incident.

“They are being kept in the gym,” Recio said. “They just called to let us know they are locked in.”

Both Pacelli Catholic School and Mayo Clinic Health System in Austin were locked down as well. Mayo officials confirmed the medical center had been on lockdown and that it is standard procedure for incidents like this.

In a letter to parents Pacelli officials confirmed that they were in a soft lockdown which meant both the high school and elementary schools were locked down and students and staff were not allowed to leave.

Pacelli was cleared to open at around 3:45 p.m.

“A few of the things I can tell you is that additional staff will be available at the doors, and students will be checked to see they don’t have something they shouldn’t have,” Alberts said Monday.

In an email to parents and students, AHS Principal Katie Baskin outline the security measures. All activities scheduled to start before 7:30 a.m. at the school were canceled, and the school opened at 7:30 a.m. All students were be required to enter through doors No. 1 and No. 13 on the east side of the building.

The campus will be closed Tuesday, meaning students will be required to stay on site for lunch. Visitors to Austin High School can only enter through Door No. 1 and check into the office.

“Just extra vigilance,” Alberts said. “Everyone responded the way we were supposed to and that’s why we practice these things.”

All homecoming activities were slated to continue as planned.

Letter to parents and students from AHS Principal Katie Baskin:

After school today, at approximately 3:15 PM, there was a fight at Austin High School which resulted in the building being locked down.  The police liaison officer and staff responded to the situation according to procedure which resulted in additional police support onsite.  It was reported that a gun was involved.  It has been confirmed that there was no gun involved.  Law enforcement is now investigating the situation.

The safety and security of our students and staff is of the utmost importance to the district.  Therefore, there will be additional security measures in place at Austin High Schooltomorrow.  All activities prior to 7:30 AM at Austin High School have been cancelled tomorrow Tuesday, September 29.  The building will open for students at 7:30 AM.  All students must enter through Door #1 and #13 on the east side.  Campus will be closed throughout the day and no students will be allowed to leave for lunch.  At this time, all homecoming activities are proceeding as planned.  Counselors will be available for students who need support.

‘He liked the adventure of doing something different’; Roger Bastyr, founder of Roger & Sons, passes away

Roger and Sue Bastyr sit with dogs Einsten, Max and Bear on a golf cart at Beaver Trails in Jellystone... read more