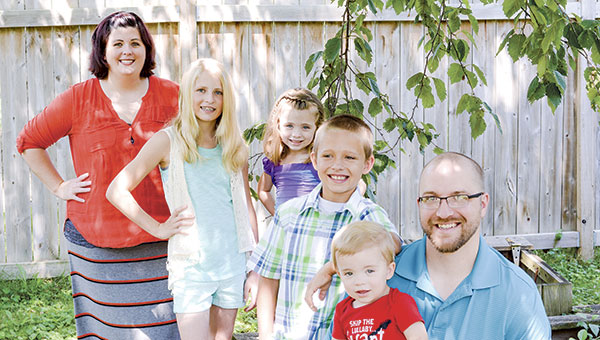 A benefit will be held Saturday for the Mergen family to help buy a seizure dog for 1-year-old Adrian. Pictured, from left, are Sarah, Alizha, Taya, Gavin, Adrian and Kyle. Photo provided by Kristina Matheis

Adrian Mergen is a pretty normal Rose Creek toddler. He loves to play with his farming toys and he keeps his parents, Kyle and Sarah Mergen, quite busy.

Yet Adrian is unlike most children in a key way. Adrian has suffered from epileptic seizures since shortly before his first birthday last November.

“He had 17 seizures the month of November,” Sarah said.

Yet the Rose Creek community is getting ready to help the Mergens in a big way. Kyle and Sarah’s friends are organizing a benefit next weekend to help buy Adrian a seizure dog, something which will help not only Adrian, but the Mergens as well.

“The dog will be able to do so much,” Sarah said.

The Mergens hadn’t even considered a seizure dog, or seizures for that matter, until Nov. 1, 2014 — the day after the Mergens and their children dressed up as Teenage Mutant Ninja Turtles for Halloween. 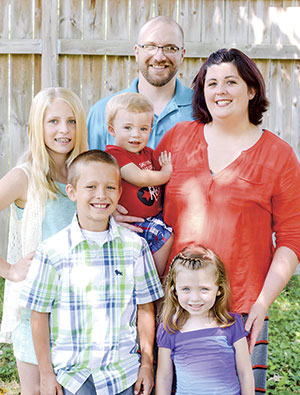 A benefit will be held Saturday for the Mergen family to help buy a seizure dog for 1-year-old Adrian. Pictured, from left in the front row are Gavin and Taya; in the middle row are Alizha, Adrian and Sarah; and Kyle is in the back.
Photo provided by Kristina Matheis

Kyle was playing with Adrian that morning when he noticed his son sat up straight, looked to the right, and started to turn blue. Concerned, Kyle told his wife about the issue when Adrian had another episode in front of her that night.

The Mergens took Adrian to Mayo Clinic Health System — Austin, but doctors initially dismissed Adrian’s episodes as acid reflux. The Mergens were almost done with their appointment when Adrian had yet another seizure, the “worst one he’s ever had,” according to Kyle.

From there, Adrian was diagnosed with epilepsy, though his seizures are a bit different than most. He doesn’t shake or have gran mal symptoms. Instead, he suffers from respiratory restrictions during the seizures — making it much harder to breath.

“The doctor said for every six or seven breaths a normal person takes, he’s taking one,” Sarah said.

Since Adrian needs to be watched on a consistent basis, Kyle and Sarah have focused more on family and less on volunteer work over the past year.

Doctors have increased Adrian’s medicine after every seizure since November, and Adrian has almost hit the maximum dosage for his size.

In addition, Adrian’s speech has hit a setback from all of the seizures. Adrian used to know about 10 words, but now he only says three.

“He’s a really smart kid,” Kyle said. “He looks like he’s frustrated sometimes, like he wants to tell us something but can’t find the words.”

A seizure dog would help Adrian in public settings, especially during school hours. A trained dog can help roll Adrian on his side during seizures and break any potential falls Adrian might have. In addition, the dog can alert nearby adults to prepare Adrian’s medication if a seizure lasts more than 30 to 45 seconds.

Friends are organizing a benefit for Adrian on Saturday to help pay the $28,000 to $35,000 necessary for a seizure dog. The benefit will start at 9 a.m. at the Little Cedar Lutheran Church Fellowship Hall in Adams with a silent auction, which runs until 3 p.m. A free will pulled pork lunch will take place from 11 a.m. to 2 p.m., and people can also get professional portraits taken starting at 9 a.m. courtesy of Kristina Matheis. For more information, contact Matheis at 507-582-1360 or Sandy Johnson at 507-481-4393.

In addition, the Mergens are looking into new technology via the Epilepsy Foundation where Adrian could wear a bracelet which would automatically text Sarah whenever Adrian exhibited seizure symptoms.

Though Adrian may have some difficulties now, he is slowly but surely overcoming them. He started American Sign Language classes a few weeks ago to help express himself and a speech therapist is working with him on his sounds.

Still, Kyle and Sarah are hoping to add another member to their family to help their little boy out.

“It’s always the unknown,” Kyle said of Adrian’s epilepsy. “You just never know with him.”

Warming up for a cool time; Nature Center has full slate for its autumn season