An 18-year-old Austin man is accused of beating several high school-aged teenagers in a fight Tuesday where one teen was stabbed in the butt and other people were hit with bats.

Ramiro Alejandro Pena was charged Thursday with second-degree rioting with a dangerous weapon. 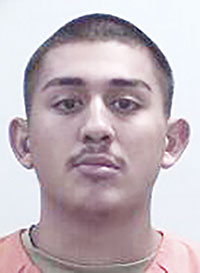 According to a court complaint, officers were called to the 1000 block of First Avenue Northwest shortly before 8 p.m. Sept. 15 after a witness reported a large group of males fighting.

Police spoke with several people involved in the brawl who told police Pena and two other men, one 18 years old and another a juvenile, confronted one of the victims earlier that day and drove up to his home in Pena’s 2005 Kia.

Pena and the other adult allegedly carried a baseball bat and a pipe to confront the victims. One victim was stabbed and another person was hit with a baseball bat. The fight had initially started between two people but grew to include about five people.

The victim who was stabbed used the knife to slash one of Pena’s tires, and another victim smashed a window on Pena’s car using a baseball bat, according to the report.

Police inspected Pena’s car Wednesday and found a new tire, along with a missing window. Officers also noticed what appeared to be blood on the console.

Pena’s next court appearance is set for Oct. 1.