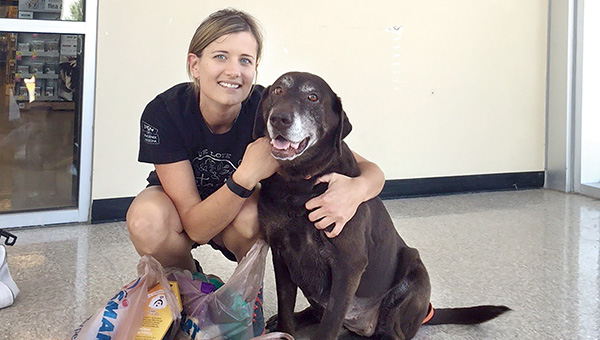 Bernie and her owner Kacy Vander Horst in front of Pet Smart after the their shopping spree, which was part of the bucket list. Photo provided

When Kacy VanderHorst’s dog, Bernie, was diagnosed with an aggressive form of cancer, she was heartbroken. In their five years together, the two became best friends and formed a close bond.

But VanderHorst didn’t wallow in her sadness. Instead, she decided to make the best of the situation by creating a bucket list for her and Bernie to complete in their final months together, and she is raising money for the animal rescue that brought them together.

“You can either sit around and be sad or go out and experience life,” she said. “That’s when the bucket list was born.” 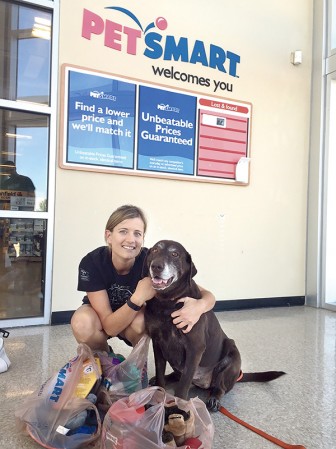 Bernie and her owner Kacy Vander Horst in front of Pet Smart after the their shopping spree, which was part of the bucket list.  Photo provided

VanderHorst adopted Bernie in 2010 when she moved to Michigan for her job at Hormel Foods Corp. She did extensive research online before she found the perfect dog at Love of Labs, an organization in Indiana that rescues neglected, sick or unwanted Labrador retrievers. Bernie, a chocolate lab, was originally found stray in Kentucky before she was rescued.

It was obvious when VanderHorst met Bernie that they would get along well.

“It was a nice balance of an active lifestyle and the sweet pup she was,” VanderHorst said.

VanderHorst and Bernie quickly became best friends and moved to Austin in 2013 so VanderHorst could work as brand manger of REV Wrap lines for Hormel.

During their time together, they’ve created lots of fond memories. From weekends at the lake and going to baseball games, to just traveling and relaxing around their house, they’ve experienced a lot. However, VanderHorst is the biggest fan of just the everyday, simple experiences they’ve had.

“The best part is the day to day,” she said. “You come home and there’s always a smile on her face.”

It was when Bernie started to act lethargic and unlike her usual self recently that VanderHorst became worried. She took her to the vet two weeks ago and Bernie was diagnosed with hemangiosarcoma, an aggressive form of cancer. The vet said Bernie had up to three months to live, and VanderHorst decided she wanted to make the most of that time. 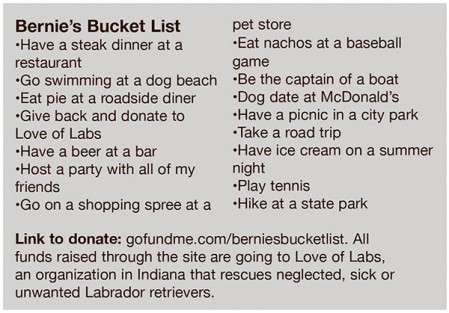 “You’re always going to deal with tough obstacles, but it’s all about how you react,” VanderHorst said. 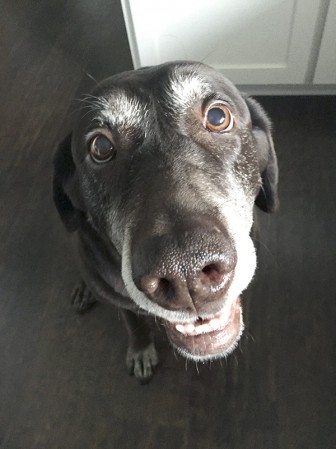 Bernie, a chocolate lab, was diagnosed with cancer and is now working to complete a bucket list Kacy Vander Horst, her owner, created. Photo provided

She created a bucket list with 15 of Bernie’s favorite activities on it. The list has a large array of things to do, including: take a road trip, drink a beer at a bar, go on a shopping spree at a pet store and give back to the lab rescue group Bernie came from. So far, she’s completed five of the items, the first of which was making a donation to Love of Labs. Thanks to a gofundme page created for Bernie, they’ve raised more than $1,200 — all of which will be donated.

Within the next couple weeks, VanderHorst and Bernie will go to a baseball game, go swimming at a dog beach and be the captain of a boat. Bernie still has many adventures yet to come in her time left, and VanderHorst will be by her furry friend’s side for all of it.

“I’m really lucky to be able to go on this journey with her,” she said. “I know we’re going to make the best of it. It’s important to celebrate life and not dwell on the negatives.”