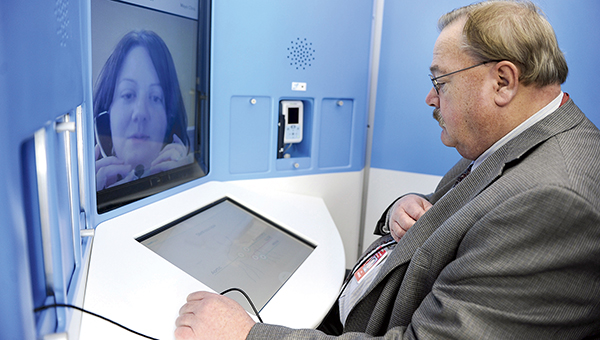 “I think the biggest thing that we’ve learned is patients are open to new ways of receiving their care,” she said. “And we’ve also learned that the level of engagement with this type of visit, while perceived low is actually really high.”

“And people like convenience,” she added. “Convenience is a big part of the decision factor in the care they receive and this is very, very convenient for people.”

The kiosks at Ellis and the former Home Health Care building opened this March for school staff and their dependents, and Barr said those kiosks are the most used, with popular times being from 10 a.m. to 12 p.m. and from 4 to 5 p.m. Barr said through Mayo’s data, there is a 98 percent satisfaction rate, which she said is good.

“We are finding that patients of all ages are gravitating and really accommodating to the technology of this type of visit,” she said.

The Austin Public Schools District announced the partnership with Mayo Clinic Health System last year with hopes to make access to medical services easier and more affordable through the use of Mayo Clinic Health Connection, a kiosk that allows patients to be treated for basic care via teleconference through the HealthSpot platform. Superintendent David Krenz said things have been going well at the school so far.

“No complaints is probably a good sign,” he laughed. “We’ve had moderate use, but I think that’s been picking up as people become more familiar with them.”

Besides the occasional technology glitch — which Barr said leaders have been able to catch and fix when they happen — things have gone well, according to Barr.

Mayo could add some extra services to the kiosks to check vitals.

“We are looking to add some services to our stations, and we’re hoping to do that yet this year,” Barr said.

The school district’s initial pilot program will last a year. Krenz said if the program proves to be a positive for the district, it may look into placing kiosks in more locations, though they won’t look at the data for at least six months to a year.

“I think we need to measure what’s happened with the current implementation,” Krenz said. “But obviously something that’s working, if an expansion would improve that experience we sure would look at that.”

Krenz hopes in the future there may be a way to expand the kiosks further for students and families to utilize the technology.

Elaine Hansen, the benefits specialist for the school district, said there were several open houses to promote the kiosks early on, and input from the employees was positive. She said that input hasn’t changed.

“It’s working well,” Hansen said. “The employees that have used it have given it a very high rating.”

She said administration has also learned staff are willing to give the kiosks a chance.

“That people were really very happy with it, the service, and they felt it was a nice option to have available,” Hansen said.

The kiosks work with a health provider — who can be anywhere with a laptop and the Internet — who sees patients inside the private, walk-in kiosk that provides high-definition videoconferencing and interactive, digital medical devices. District staff and Mayo Clinic Health System staff, as well as their dependents can visit any of the three kiosks. Along with the Ellis and Fourth Avenue Northwest kiosks, a third kiosk has been on the second floor of the medical center since last fall. The patients can visit the kiosks without scheduling an appointment to be treated for minor, common health conditions, such as colds, earaches, sore throats, sinus infections, upper respiratory infections, rashes and skin conditions, and eye conditions.

The kiosk takes height, weight, blood pressure and temperature, and comes equipped with a magnascope to look at eyes, throat and skin, an otoscope to look at the ear and ear drum, a pulse oximeter which takes oxygen levels, and a stethoscope to check heart and lung readings.

Clinic officials first started discussing the HealthSpot idea about a year ago when an administrator saw the unit at a conference. Administrators say such kiosks could eventually be used at workplaces to provide easy access to healthcare, and it could help businesses keep healthcare costs down.