From coach to fan; Worke ready for next phase after leading BP girls basketball for 22 years 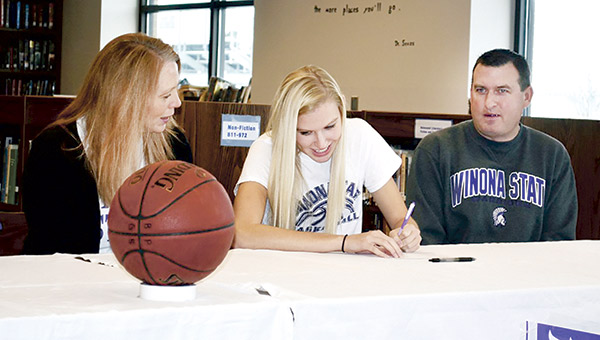 John Worke, right, watched his daughter Madison sign her national-letter-of-intent to Winona State in 2014. Worke is stepping down as head girls basketball coach at Blooming Prairie after 22 years on the job. Herald File Photo

BLOOMING PRAIRIE — After 22 years as a head girls basketball coach, John Worke has seen plenty of heart-breaking losses, and he’s had his fair share of big time wins. But as he walks away from the game he’s coached for more than two decades, Worke will remember the camaraderie the most.

The relationship he had with other coaches is one thing he will always cherish.

“When I first started the other team is the enemy and the other coach is the enemy,” said Worke, who recently stepped down as BP head girls basketball coach. “Really they’re good friends. We’re all in this together and we all deal with the things that coaches deal with. They’re more of a support group than the enemy.”

Worke’s career highlights include a trip to the state tournament in 1999, but BP was never able to play in the Twin Cities that season. BP, which beat Lake Cyrstal-Wellcome-Memorial to get to state, played the state quarterfinals in Mankato, and they lost their first game of the tournament. 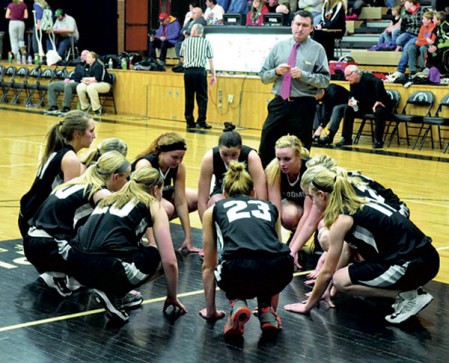 Worke was thrilled to make it to the state tournament so early in his career, but he didn’t realize how hard it was to get to state until he spent the rest of his coaching career without another state tournament appearance.

“I really didn’t realize when it was all happening how hard it really is to get there. Looking back that was a pretty special year to be able to do that,” Worke said.

For the last four years, Worke was able to coach his daughter Madison, who will continue her basketball career at Winona State University. Worke said it can be tough being the coach’s kid, but Madison was able to thrive on the court.

“It was a lot of fun, especially when she’s the caliber of player she is, that makes it fun,” he said. “I never realized how stressful it can be. I don’t think she ever gets the credit that she deserves. It’s always because of me, it’s never because of what she has done. I feel bad for her in that aspect, but the good thing is other people must’ve seen the same thing because she got a scholarship to play at Winona State.”

One of the biggest draws to coaching for Worke was the teaching process in practice. He said it was great to work on things in practice and then see them come to fruition on game nights.

“I’ve never yet to find the feeling [in anything else] that I feel when you prepare all week for an opponent and then you go out and play that game and you execute all of the things that you worked on in practice,” Worke said. “Then you see the enjoyment on the kids’ faces and you get that sense of accomplishment.”

Throughout Worke’s tenure as a coach, the influence of parents has become heavier and heavier as parents spend more money on AAU basketball and summer camps. It sometimes leaves coaches with tough decisions when it comes down to divvying up playing time.

Worke will now be making the transition to fan as he watches Madison play in college. He’ll also watch his youngest daughter Julia play basketball as well.

Worke said he’s looking forward to just sitting back and watching the games.

“I can’t wait to experience that. I can just sit back and watch and not worry about the Xs and Os of the game and the outcome of the game,” Worke said.

Worke isn’t worried about not having anything to compete in. He still golfs and he played slow pitch softball for a long time, but now he’s ready to relax.

“As time goes and I get older I think the competitive juices kind of fizzle a little bit,” he said.

The Hayfield boys golf team finished second overall and it qualified two golfers for the Class A state meet at... read more