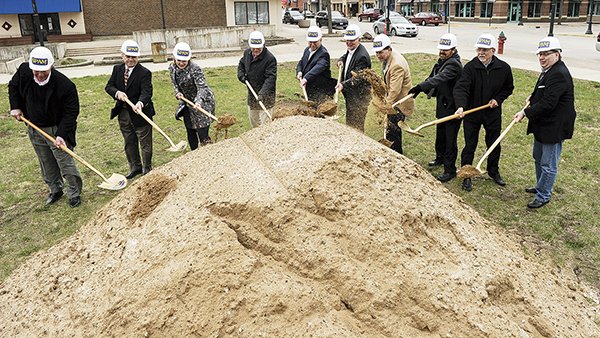 The Spam Museum is ready for construction.

Hormel Foods Corp. officials broke ground on the new Spam Museum Tuesday, which will go up between Second and Fourth Avenues on the east side of North Main Street.

The city of Austin is set to reopen Third Avenue Northeast between Main Street and First Street Northeast as well.

Plans call for a 14,000-square-foot building spread out over one floor. In addition, the museum will have blue-accented walls on the outside of the building, which Hormel and city officials say will help bring a unique aspect to the downtown area.

“We really share the enthusiasm for enhancing downtown as a destination for both for our city residents and for our city visitors,” Ettinger said.

Architects and workers expect to finish the exterior this fall, and wrap up construction on the museum’s interior next spring. After a soft opening, the Spam Museum will hold a grand opening as part of Hormel’s 125th anniversary celebration in late July 2016.

The Spam Museum’s move to downtown is the result of several years of discussions. Community advocates and Vision 2020 volunteers had pushed for the Spam Museum to move into the Austin Utilities downtown power plant in 2012 as part of Vision 2020’s Utilities Building Committee plans.

Vision 2020’s Destination Downtown committee approached Hormel officials in fall 2013 about using the fire site formerly owned by the Austin Port Authority as a new location for the Spam Museum. Since then, Hormel has worked with several organizations including the city of Austin to move existing businesses out of the Ciola’s building and into other spaces.

Now the museum is going downtown, city officials hope the increased tourism, along with several other major projects through Vision 2020, will continue Austin’s current growth.

“It seems like Austin is just really on the move right now,” Mayor Tom Stiehm said.

The original Spam Museum opened in 1991 inside the Oak Park Mall. Hormel officials created a new location for the Spam Museum in 2001 at 1101 N. Main St., connected to Hormel’s corporate office south building.

Taste of Nations cooking this Saturday

The sixth annual Taste of Nations is back with a new flavor. The annual multicultural event will be held at... read more