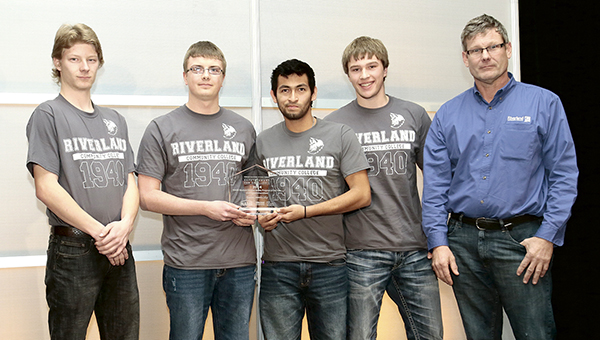 Students and a professor at the Riverland Community College carpentry program accept the National Association of Home Builders Safety Award For Excellence for the NAHB Student Chapter Safety Program of the Year College /Universities. They accepted the award in Las Vegas, Nevada, in January. From left: Bryer Kruse, Branden Chadwick, Eduardo Vega, Jared Bingham and Professor Walt Alms. There are currently 18 students in the program. — Photo provided

Riverland Community College’s carpentry program is making a difference when it comes to safety.

The carpentry program at Riverland Community College was recognized for its safe practices at a ceremony in Las Vegas in January. A group of four second-year students and carpentry instructor Walt Alms traveled to Las Vegas for the National Association of Home Builders and accepted the National Association of Home Builders Safety Award For Excellence for the NAHB Student Chapter Safety Program of the Year for Colleges/Universities.

Alms said a group goes to the home builders show every year, but this year he submitted paperwork for the excellence in safety and safety education award.

He was surprised to learn they won the award against not only community colleges but also universities.

“We were all quite surprised, and more surprised after we got there and realized it was … for colleges and universities,” Alms said. “We won over some of the possibly larger schools that obviously are quite active in the builders association and participate.”

Alms said one of the main reasons they applied for the award is the addition of Occupational Safety and Health Administration 10 training, which is 10 hours of OSHA training at Riverland’s program.

He hopes to offer OSHA 30 soon, which is the standard most companies aim to get their workers at. If students take the class at Riverland, they won’t need to take the training again.

“They can go on to a job site and present that OSHA 30 card and then they no longer have to go through that safety course,” Alms said. “It’s a massive resume item that they can get on there.”

But the OSHA classes weren’t the only reasons Riverland received the award. The program is also very focused on staying safe.