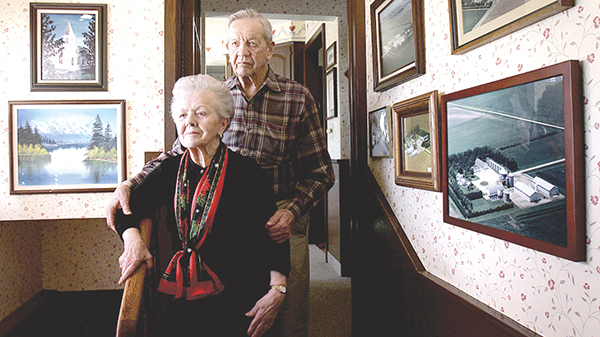 WESTFIELD TOWNSHIP — Ten hog farms sat already in a three-mile ring around Lowell Trom’s rural Dodge County home. When an 11th got a permit, he fought it.

Trom and his wife Evelyn sued and initially won their first lawsuit against the county in December when a district judge said officials had approved an incomplete permit application. Two days later, however, the operator revised the application.

By the end of the month, the county approved the project, a 2,400 hog operation on six acres bordering the Troms’ land.

County officials say they followed the law. The growth of large animal feedlots in the region, however, has some residents overwhelmed and worried about the future. The operations, they believe, may pose a threat to local groundwater and are damaging quality of life.

The Troms are at the center of that storm.

They’ve filed a second lawsuit against Dodge County, saying it put in place an unfair and biased process to fast-track the project, and are waiting on a hearing in the coming weeks.

“It just got too big. That’s the problem,” Lowell Trom said recently of the livestock operations around him as he flipped through pictures of his farm from over the years. He was born in this Westfield Township home 85 years ago and has grown corn and soybeans here for decades on 760 acres.

The Troms’ daughter, Sonja Trom Eayrs, says her parents are concerned about the odor, but also about long-term effects on air quality, water usage and contamination. The county, she said, changed the rules to favor feedlot operators.

“They fast-tracked it,” she said. “They couldn’t wait to rush this thing through, hoping, quite honestly, that they would just shut us down.”

Dodge County did amend its permitting ordinance earlier this year, lowering the requirements for initial conditional use permits. Issues like manure storage and irrigation are no longer required until later in the permitting process.

Mark Gamm, the county’s zoning and environmental services director, says the county simply adjusted its requirements to comply with the judge’s decision.

“We don’t agree that it was fast-tracked,” he said. “We followed the judge’s directive and we amended our ordinance to clarify what’s required at the application stage.”

County Administrator Jim Elmquist adds that the process was quick, but legal. The county held a public hearing, notified the state of the new application and notified local township officials, he added. “What’s trying to be projected out there is that Dodge County fast-tracked it so nobody could get the information. Everybody had the information.”

State officials recently launched a new program in four southern Minnesota counties, including Dodge, to review how much water livestock farms use and whether their permits allow it.

Minnesota requires operators that use more than 1 million gallons of water a year to have a water-appropriation permit. But only a fraction of those have proper permits.

“There’s just been a big push statewide about the volume of water we’re using,” said Jim Sehl, a groundwater specialist with the Minnesota Department of Natural Resources.

The effort is not meant to fine or penalize feedlots, but rather to get operators the proper permits, Sehl said.