Two in one; Couple passes away after 67 years together 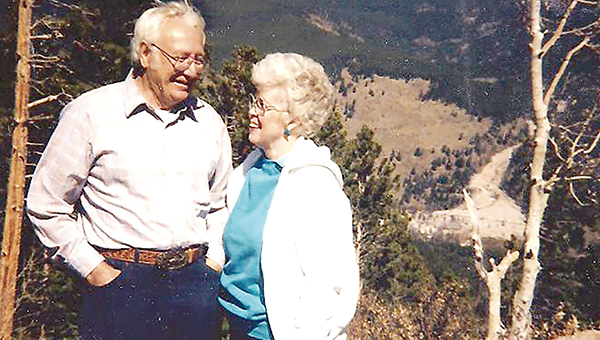 Myron and Betty Young vacationed in Colorado. The couple celebrated 67 years together before passing away two days apart. — Photo provided

AUSTIN — Myron and Betty Young spent more than 67 years together and they weren’t going to spend many days apart.

“We have a theory that somehow someway in their own way, my dad must have said, ‘You know what, Betty, I’m going to go. You come a few days later,’” daughter Mary Beth Norris said.

“People who know my mom and dad, they would get that, because that’s something that they would do,” she added.

The couple was known around town, as Betty was a probation officer for Mower County for 30 years, and Myron was a farmer with several jobs. The couple raised three children — Brian, Wanda Gwinn and Norris — on Myron’s family farm in rural Oakland, where they remained most of their life.

Myron and Betty were married 67 years and didn’t spend much time apart.

“It was like they really were one person,” Gwinn said of her parents.

Though they two had different personalities — Betty was a go-getter, and Myron was a man of few words — Norris can’t recall any heated arguments or fights between her parents over the years.

“They were very patient. My dad was more patient than my mom,” she laughed. “They were good balance for each other.”

Betty was diagnosed about three years ago with Lou Gehrig’s disease. Gwinn said her father helped fill in wherever needed as her mother grew weaker from the disease.

“In her weakness, he just picked up and became stronger,” she said.

But the couple’s health declined late last year. Myron was treated at Mayo Clinic Health System in Austin for the flu on Dec. 22, 2014, and Betty went to Mayo Clinic Hospital — St. Marys Campus in Rochester on Dec. 24, 2014, due to health issues. Norris said it was hard for the couple to be apart so long.

On New Year’s Eve, Betty was moved to St. Mark’s nursing home, and Myron followed on Jan. 5, though he was in a coma-like state. But on Jan. 7, Myron woke up and the couple spent some time together reminiscing about their lives, saying “I love you,” and holding hands.

“It was just our own little miracle that dad woke up,” Gwinn said.

Gwinn admired her parents’ perseverance through the years, through good and bad times alike. She said both Myron and Betty touched many lives, and nobody had a bad word to say about either of them.

“They were very loving to everyone,” she said.

Myron worked as a farmer on the family farm, but he had many jobs over the years. Norris recalled him working as a postal carrier, a grain operator at Austin Seed, and a carpenter. He loved woodworking and made many beautiful pieces of furniture. 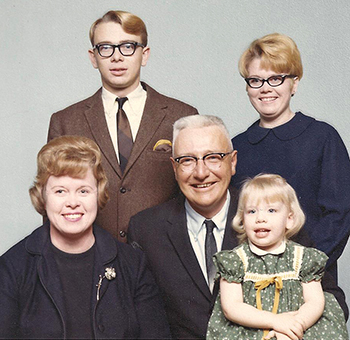 Myron and Betty Young sit with their three children, Brian, Wanda (back) and Mary. The couple celebrated 67 years together.

Norris recalled her father’s love for the outdoors. Even after the animals from the farm were sold, Myron would be outside working and mowing the lawn. She remembered her father spending a lot of time getting together with friends for coffee.

“He was a character,” she said. “He was the jokester, but more laid back than mom.”

She remembered having friends over, and her dad asking if they wanted a jam sandwich. Then he whammed two pieces of bread together.

They “didn’t quite know what to make of dad, but he was a great dad,” Gwinn said.

Norris said her father was a man who wanted to get every detail just right, whether it be at work, on the farm or while woodworking. When he could no longer do the woodworking himself, Norris recalled others coming over to get instruction from Myron. Gwinn remembered the furniture he made, including cupboards at their home and their grandparent’s home, a baby cradle and a dolly cradle made for a granddaughter.

Norris said her mother wasn’t defined by her shorter stature.

“A lot of people would have called her 5 foot and bulletproof,” she laughed.

She recalled her mother being there whenever anyone needed her. Gwinn also remembered her mother’s kind heart and energy.

“You could kind of feel her energy, you know, and I think she was passionate about what she did of anything in life,” Gwinn said.

“I enjoyed working with Betty, she was a good woman,” Jette said.

He worked with Betty for about 25 years doing custody investigations and custody mediations for divorce. He also worked with juvenile delinquents.

“She usually handled all the girls’ cases, and the girls she worked with had a lot of respect for Betty,” Jette said.

He noted Betty returned the respect. When Jette runs into some of the girls Betty helped, they still speak highly of her. He said for some of them, she became a mother figure. That included providing discipline.

“She was also strict,” Jette laughed. “The girls couldn’t get by with much. She was ahead of them on most things.”

Even in work, Myron and Betty weren’t far apart.

Myron supported Betty in her work and helped whenever he could, often driving whenever Betty had to transport a juvenile.

“Both of them were terrific people,” Jette said. “They had a great feeling for other people, were very helpful, and I know had a great love for their own children.”

After retiring from the county, Betty worked part-time at Johnson Floral as a flower designer.

“She decided to do something creative without so much responsibility, because she was retired now,” Norris said. “That never really slowed her down, though.”

Betty loved each job she took on, as well as gardening and being outside. Norris recalled growing up with a large garden with everything from food to flowers.

“Those were her great passions, you know, people — kids especially — and being outside with her hands in the dirt,” Norris said.

She recalled her mother never sitting still long. Norris and Gwinn both recalled Betty coming home from a long day at work, starting supper, changing clothes and going out to the tractor. Norris said by the time she and her siblings got up for school, Betty had done the laundry and hung it on the line, cooked breakfast and saw them off to school. Then she worked nine or more hours at the courthouse and would come home to work on the farm.

“I think she was a really strong woman,” Gwinn said. “She was very witty, had a good sense of humor, which she had to have living with my dad, because he was kind of a jokester.”