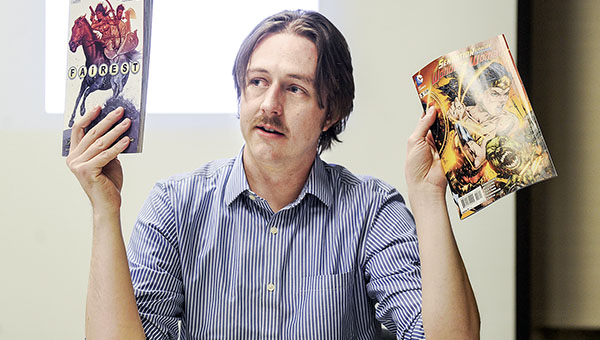 About two and a half years ago, writer Sean E. Williams with Adam Knave and Andrew Losq released their graphic novel “Artful Daggers.”

Since then Williams has become fully immersed in the world of comic writing and Wednesday night he brought his experience to The Austin Public Library where he opened that world to a room of about 20 people.

“I kind of fell into this,” Williams told the room. “My wife and I lived in Los Angeles and we got kind of tired of it.”

The couple moved to Austin and from there Williams said it became a matter of simply meeting people.

He began building contacts as his wife, Lindsey, became the theater director at Riverland Community College.

Williams, who has a background in TV and theater writing, pushed further into the genre and soon he was being asked to give pitches for projects along with developing his own ideas.

His path led him to write an arc for the successful “Fairest” series, a spinoff of the acclaimed “Fables” series. he also wrote two comics for the comic spinoff of “The Vampire Diaries,” as well as “Sensation Comics featuring Wonder Woman.”

Wednesday’s presentation opened the book to a public who may not know as much about comics.

But for Williams, it was only a small window into his ever-growing world of comic writing.

At one point in his presentation a woman commented, “I didn’t know there was so much work.”

Williams smiled, laughed and admitted the world of comic writing can be up and down.

“The thing about comics work is that it’s really hit or miss,” he said. “When it rains it pours.”

As Williams’ own work has gradually picked up steam, it’s easy to think that he’s on easy street. But he’s quick to point out that he could always be busier.

“I have a number of pitches out,” said, speaking to the waiting game he endures at times while also speaking to the flip side. “I could have three series green lit tomorrow.”

What it comes down to though is relationships. Over the years, Williams has found there is a very definite right and wrong way to do things.

Often times, he said, people will hunt after this editors and publishers who can help make them right away. Williams admits to trying that, but found it was not something that worked for him.

“The thing with comics, prose, films and TV is that it’s all about the relationships,” Williams said. “You can’t force those.”

Williams, instead chose a healthier way to get noticed. A way that let him simply hang out with friends.

“I go to conventions, hang out with friends,” he said. “Those friends happen to know editors. You get work that way.”

Over roughly the past 10 to 15 years, the comic industry has enjoyed a steady growth that has stretched the medium past the superheroes that drove Marvel and DC.

Corresponding with that was the technology that seemed to develop along side it.

“I credit iPads and tables with a big part of that,” Williams said. “A large portion of the country doesn’t have comic book shops.”

The rise of technology gave the world of comics a natural avenue to distribute all kinds of subject matter. It appealed to both readers and those publishing the comics.

“You can do it on your own,” Williams said, describing the world of digital first and online comics.

The natural progression simply opens up the possibility of comics reaching more people.

“The great things about games and technology is you can have one comic come out in multiple formats. You’re reaching totally different people.”

Comics and the world

As technology opened comics to more people, more minds opened. A circle of superheroes, driven by the major publishing companies, was slowly being broken.

“A big part of DC and Marvel is that their backbone is superheroes,” he explained. “They’re listening to their fans and it’s a loop.”

“And then Image came on the scene,” he added. “The past couple years, they’ve shown you can do more in comics than superheroes.”

Williams has also noticed that there has been a shift to more realism in comics.

“You’re definitely seeing a lot more realism,” he said. “There’s more opportunities to be had than lost.”

Publishers are also starting to reach out to an all ages format. Titles like “Adventure Time,” “Gotham Academy,” and yes, even “My Little Ponies,” are reaching more and more people.

“Publishers are starting to realize there is a market for that,” Williams said.

It’s also appealing more to those who used to read comics the most: Kids.

“There aren’t comics for kids anymore,” he said. “And we need more kids to read comics.”

Looking at the industry as a whole, Williams is happy with where he’s at. His own view is almost like a mirror for an industry that maybe isn’t taking itself so seriously anymore.

“I think comics changed tonally from grim and dark to hopeful and positive.”

And like all people who are looking for a career it comes down to happiness.

“It’s being able to do a combination of licensed and creator-owned works — it’s fantastic,” Williams said.

A new kind of reader

As Sean E. Williams continues his work in comics, he also finds his time being drawn to comic conventions, a natural and necessary venue to get his product out.

With the latest book of “Artful Daggers,” out, Williams was on the circuit promoting.

“You need to get in front of the reader,” he said.

Ironically, he found more of his success though at anime shows and for one very good reason.

“Manga readers are trained to try out new comics,” he said. “We sold as well at anime shows, if not better, than comic shows.”