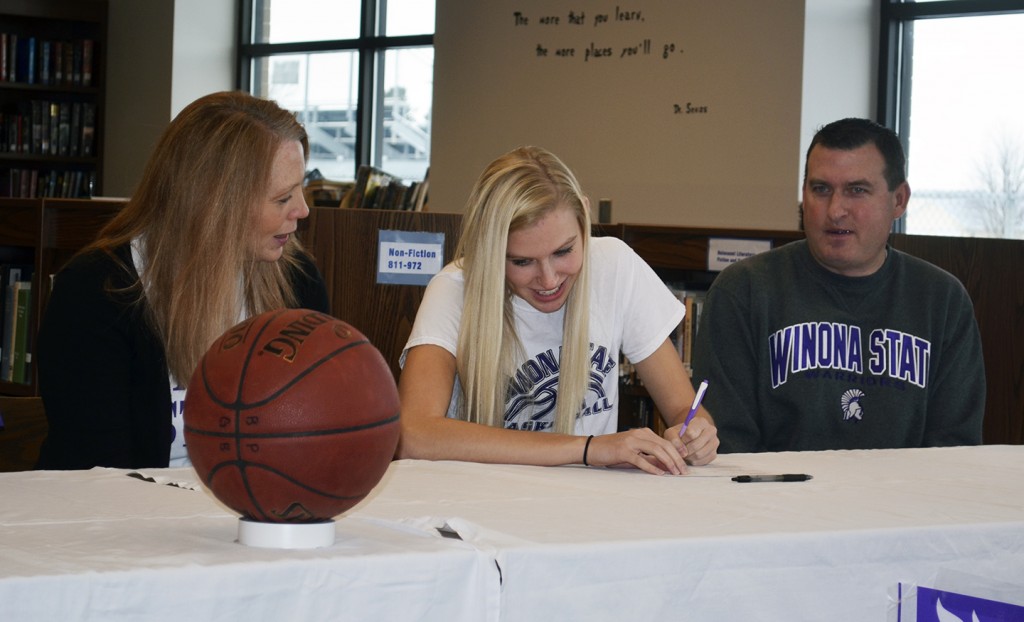 BLOOMING PRAIRIE — It was a big day in Blooming Prairie High School Wednesday.

Hagen and Worke have been teammates in basketball since they were on a fourth grade traveling team together and they’ve grown especially close over the years.

“I want to say [Taylor] even visited me in the hospital when I was born. That’s how close we are,” Worke said. “She’s a great team player and I’m so glad we have her on our team.”

Hagen, who is BP’s all-time leading scorer, verbally committed to Northern Iowa last Fall and she never wavered from that choice. She was glad to have Worke by her side on her signing day.

“It was really nice being next to your best friend when you’re going through something big,” she said. “She’s the greatest teammate and we’ve played together all of our lives.”

Hagen, who averaged 15.6 points and 8.4 rebounds per game last season, will play power forward or center at UNI next season and she said she wants to work on playing faster and getting stronger this season. UNI finished 17-13 overall last season. 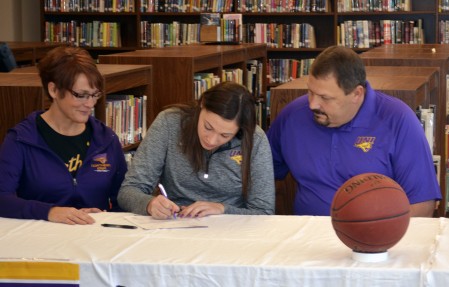 WSU went 10-17 overall last season and Worke is looking forward to playing for the Warriors.

“It’s so exciting. I feel ready to start a new chapter here in my life and it was awesome to do it next to Jasmine and Taylor,” Worke said.

The Awesome Blossoms advanced to the Section 1A West title game last season and they’re hoping to put together another quality run this year.

“We’re definitely motivated,” Worke, who averaged 12.4 points per game last season, said. “I think we want to make it a great year and we want to be remembered.” 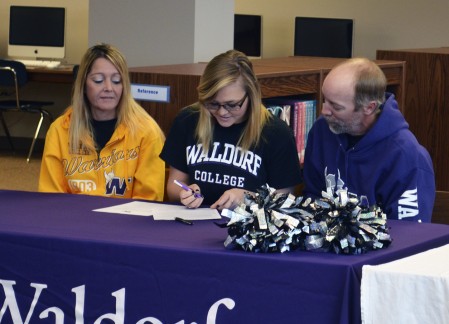 “I e-mailed Dyanna and two weeks later everything just happened,” Hohenstein said. “It’s amazing because I didn’t even know about it until the beginning of this year. I’ve always wanted to be a cheerleader in college and now I’ll be able to do it.

Hohenstein has never done competitive cheerleading before and she’s looking forward to doing that at Waldorf. She said her signing was made special with two of her classmates by her side.

“It’s exciting,” Hohenstein said. “We’ve all been in school together forever and it’s pretty awesome that we all have these amazing opportunities.”