Sexual abuse in the Catholic Church

He was a gifted theologian, a man who was expected to become a leader. He was a passionate priest who volunteered in the community, helped the Boy Scouts and was a chaplain for the National Guard.

He preyed upon high school-aged boys and sexually assaulted several Austin teens during his time in the community. He allegedly plied elementary students with drugs and alcohol. He was forced to leave the Catholic Church after he molested another man. 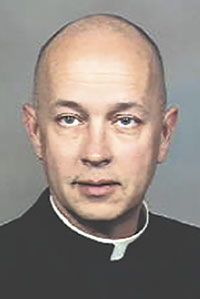 He was a complicated sexual predator, and his victims throughout southeast Minnesota include several people in Austin. His name was Father Jack Krough.

“He was a very smart perpetrator,” Advocate Patrick Wall said. “There was never any physical violence that he ever used. It was all coercion.”

Portrait of a wayward priest

Krough’s name wasn’t a surprise to Wall and other attorneys at Anderson Advocates, a law firm specializing in church sexual abuse cases. Anderson Advocates knew about Krough back in 2003, a year after Krough was dismissed from his duties in the church.

Yet the public wasn’t aware of Krough’s misdeeds until the diocese publicly released dozens of letters, reports and other correspondence concerning Krough last month as part of ongoing lawsuits.

Krough’s file reveals a priest who appeared to be dedicated to his calling. It also reveals a man who took advantage of his position to prey on others.

He was born Aug. 11, 1949 in Estherville, Iowa, to Methodist parents. Krough didn’t convert to Catholicism until his years at Morningside College. He took on odd jobs here and there until he felt called by God to enter the seminary in 1971.

“This is an age of serious problems for our world which each person must grapple with,” he wrote in an entrance essay. “I believe that the answers to man of the problems which plague all men are answered by the gospel message maintained by the church. I want to try to bring this message to other people as it was brought to me … I believe that I owe God so much, and I want to serve him in the manner that will be in keeping with his will and also of service to my fellow man.”

Krough spent the next several years training to be a priest, during which time his superiors lauded his passion for the church and his ability to relate to parishioners. He had a flair for counseling others, “substantially above average,” according to one report.

Church leaders also noticed his tendency to become authoritative and independent at times instead of part of a group. They noted his independent streak could, at times, become an issue.

His superiors felt Krough would likely not break his vows to the church and to God.

“He views celibacy as a spiritual gift which he accepts, and to which he is willing to make response,” wrote Rev. Robert Brown, President of Immaculate Heart of Mary Seminary, in 1972.

Krough was ordained on May 21, 1976. Five days later, he was appointed as a religious instructor at Pacelli High School in Austin as well as associate pastor of St. Augustine Parish. He would stay in Austin for four years before he was transferred to Cotter High School in Winona in 1980, Lourdes High School in Rochester in 1985 and to churches in New Richland and Waldorf, Minnesota, in 1990.

Krough was considered an excellent teacher and a respectable priest by the church and by the community. He was an advisor in various photography clubs and would relate to students through music and movies. He also served as a chaplain in the National Guard ever since he first volunteered in 1980.

He was a teacher at Lourdes in 1988, when 16-year-old David Brom killed his parents and two of his siblings with an axe. He spoke to media outlets about David and helped counsel teens after the shocking crime came to light.

During this time, Krough cemented his positive reputation, which figured into his first pastorate in New Richland and Waldorf.

“Time and again people from the Lourdes community have told me of their appreciation for your good work there,” then-Bishop of Winona John Vlazny wrote to Krough in 1990. “You have been a good influence on our young people and have been a model teacher.”

The first accusations of sexual abuse against Krough came in 1993, when someone came forward to say Krough allegedly photographed him nude at Pacelli High School. Though he stated at the time he couldn’t remember the victim’s name, Krough told church leaders he would follow through on recommendations from the Saint Luke Institute, a renowned treatment center for the clergy.

His reputation grew in the church as he was appointed a censor of Catholic publications in 1995 and volunteered his time in the diocese’s AIDS ministry.

He was transferred back to Austin in 1996. There, he would become pastor at St. Edward’s Catholic Church and Our Lady of Loretto Church in Brownsdale.

Other victims came to the church to accuse Krough in the summer of 1997. They alleged Krough had sexually molested several teens during his time at Pacelli High School and at Cotter High School. Krough would later admit to almost every accusation leveled against him to diocese officials.

One incident involved Krough and a student working in Pacelli’s dark room when the two dared each other to pee into a bucket. Krough admitted to grabbing the student’s genitals while he went to the bathroom.

Another incident took place when Krough invited a student to St. Augustine’s rectory every other week, where they would wrestle and where Krough would grab the student’s crotch during the matches.

Krough also allegedly had students sit in his lap while looking at pictures, and allegedly touched the student’s upper body and legs. Krough would confide in the student, or would break down and cry, to get the student to comfort the priest. In an interview, Krough said he didn’t recall these incidents, but didn’t deny them.

Krough and another student had a sexual conversation during a trip to the state high school basketball tournament one year in St. Paul. The student shared a bed with Krough in a hotel room when Krough allegedly accused the student of grabbing his genitals. Krough allegedly told the student that their relationship had now become a sexual one, and because of this, Krough would have to kill himself. Krough remembered staying with students in a hotel room during the tournament but didn’t recall the incident.

The most serious allegations involved another Austin student, who visited Krough in Winona after he transferred to Cotter. The student visited Krough on several weekends, where the two engaged in sexual activity. Krough would also make the student get naked to see what he looked like nude.

Krough admitted most of the allegations were true but told church investigators he didn’t recall telling the victim not to tell anyone else.

Other witnesses told the church about allegedly inappropriate actions Krough made during his time in Austin as well.

In 1998, another victim would come forward accusing Krough of taking him to the Hormel Nature Center and photographing him nude.

Though Krough had admitted to taking pictures of nude teens, there was no evidence he ever distributed those photos.

Krough was placed on administrative leave in August 1997 and was sent to St. Luke Institute in Silver Springs, Maryland. He was reinstated in April 1998 and sent to Assisi Heights in Rochester as a chaplain. He lived and worked with the nuns there for the next several years.

Krough went through therapy and attended support groups for a time. Though church officials encouraged him to continue his treatments, they also kept an eye on him and appointed a supervisor within the nunnery who monitored Jack.

Krough was thoroughly monitored in 1999 and 2000, though not every priest believed Krough had overcome his sexual urges. In one report, a priest wrote he specifically asked Krough about his time online and whether Krough looked at pornography and sex chat rooms. Though Krough denied doing so, the priest noted “Jack is among all our priests the most computer literate.”

Krough was eventually forced to leave the church in 2002 after an adult male accused Krough of attempting to coerce him into sex. Krough and the victim had emailed back and forth on various topics before the victim came to Krough seeking help. Krough allegedly molested the victim during a supposed prayer session.

After that, Krough was dismissed from ministry and was told he could not present himself as a priest in public. He was given a $1,300 per month pension as well as continued health care as part of the agreement.

Krough went to live with relatives in Barron, Wisconsin, for the next decade. During this time, he became involved in more photography and helped with a local business. He also struggled with colon cancer.

Church officials requested Krough seek laicization on his own in July of last year. Krough agreed and submitted a request to the Vatican.

Yet his pending laicization may not come through. Krough, 65, died on Oct. 12, just a few days after the church publicly released his file.

Wall and Anderson Advocates are still working to uncover more information about Krough. Wall said he would be interested in looking at Krough’s unpublished novels as well as his music collection, both of which could reveal more potential victims.

The Diocese of Winona is working to settle lawsuits by victims of Krough and other priests. Wall said he couldn’t reveal how many of Krough’s victims have filed suit. The Herald could not get Diocese officials for comment.

Yet the fact remains a priest in Austin abused several students in the 1970s and 1980s.

—A Time of events.

—Krough’s file released by Anderson Advocates and the diocese.