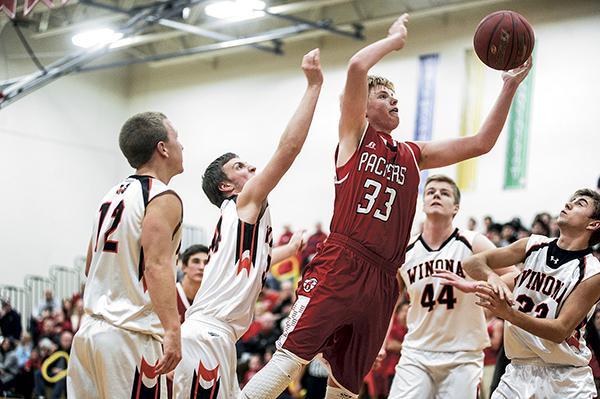 Austin’s Kyle Oberbrockling puts up a shot off the rebound during the first half against Winona Tuesday night in Packer Gym. Eric Johnson/photodesk@austindailyherald.com

The Packers were a little tentative early on, but they made big plays when it mattered as they opened their season with a 59-44 win over Winona in a boys basketball game in Packer Gym Tuesday night. 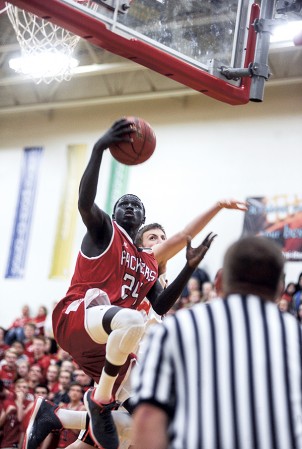 Austin’s Gach Gach goes in for two of his 17 first-half points against Winona Tuesday night in Packer Gym. Eric Johnson/photodesk@austindailyherald.com

Austin led 47-40 with 3:46 left when it slammed the door on the Winhawks (0-2 overall, 0-2 Big Nine) with a 10-0 run over just two minutes. Dylan Gasner converted a four-point play during the run and Zach Coffey had a pair of drives for scores to help put the game away.

“When were in transition we had good shot selection,” said Coffey, who had 13 points, four assists and four steals. “In the first half we were kind of jacking up too many threes, but in the second half we were better with our cutting [to the basket].”

Gach Gach gave the Packers (1-0 overall, 1-0 Big Nine) an early surge as he scored all 17 of his points in the first frame to lead Austin to a 26-17 lead at the break. Gach added 11 rebounds, two steals and two assists in the win.

“Gach carried us through the first half,” Austin head coach Kris Fadness said. “He came out with some early energy and he made some shots. It took awhile to get everyone in the flow. We need Gach to be a play-maker for us and he needs to get other guys shots as well. I thought he was much better at that in the second half.”

Gach is the primary play-maker returning for the Packers, but he’s hoping Austin will have some new play-makers in the new future. The Packers are hoping to improve as they get more time on the court together.

“It’ll come with time. We haven’t played together too much yet,” Gach said. “I struggled in the second half and I couldn’t find my shot. Other guys stepped up and made big plays and we gutted out the win.”

Winona pulled to within 34-31 early in the second half when Levi Vierkandt hit a big 3-pointer from the corner to keep them at bay.

“I was really proud of Levi, Nik [Gasner], Dylan and Zach Coffey to step up in the second half to make shots when we needed them to,” Fadness said. “[Winona] had momentum and it was nice to see our guys regroup, gather ourselves and make plays. This isn’t last year. This is going to take some time. We lost some really good players and those players had the ball in their hands the whole game. For these guys, they’re not role players any more.”

Austin forced 19 turnovers in the win, but it also committed 17 turnovers. 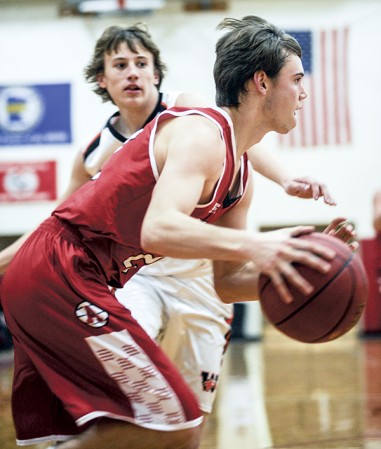 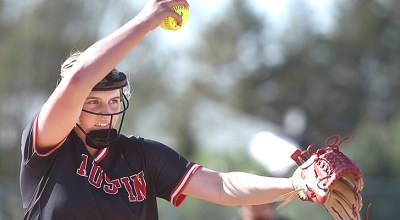