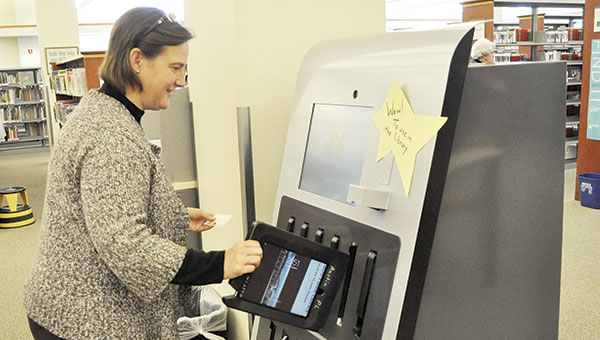 The library is keeping up with its technology with hopes to keep members up-to-date as well.

Last week, the library unveiled a new rental machine that allows people to rent either an iPad Air or an HP 14-inch laptop for up to four hours at a time with just their library card. The machine also stores, recharges and wipes clean the data of each device. 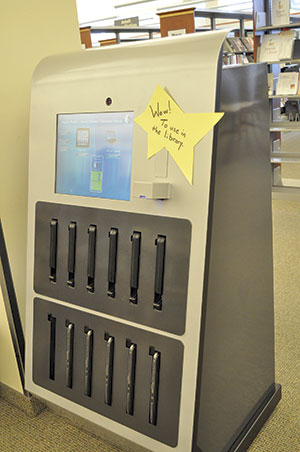 The new rental machine at the Austin Public Library was active Oct. 3. It has six iPad Air’s and six HP 14” laptops for rent. Jenae Hackensmith/jenae.hackensmith @austindailyherald.com

“This is a machine where it holds laptops and iPads, and you scan your library card and out pops one and you get to use it for four hours,” Austin Public Library Director Hokanson said. “It’s really fun, it’s like, that’s exactly what it does, but then when you actually do it, it’s like, this is really cool.”

Ann Hokanson and Gayle Heimer worked on the project since 2013.

The rental machine, along with the 12 devices, cost about $37,000. The bulk of the money was donated by the Hormel Foundation, and the rest came from the library’s gift and memorial fund.

The library received the money in January of 2014, and after phone calls, conference calls, getting quotes and looking at many companies, the library decided to purchase the machine at www.laptopsanytime.com, an online company that sells the rental equipment.

The machine arrived in August and was up and running by Oct. 3. Now that it’s available to library patrons, Hokanson said she is excited to see people using it.

However, there are some restrictions on the devices.

“You need to be an adult and you need to have a [library] card, and it needs to be completely free of any blocks,” Hokanson said.

People age 16 or older can check out the devices, otherwise a younger patron can use one with a parent/guardian. Although users can’t take the devices out of the library for now, they can go anywhere within the building.

Heimer saw the rental machine while at the 2013 Annual American Libraries Association conference, and Hokanson jumped on the idea as a way to keep people updated on new technology.

“I think it’s really important for people to have an opportunity to try out new technologies,” Hokanson said. “I think it’s an important part of digital literacy to be able to use all those different kinds of devices.” 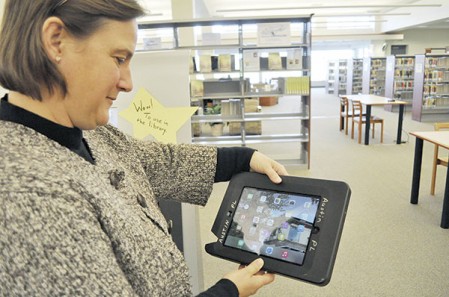 Ann Hokanson shows off one of the iPad Airs that is available to rent from the new self-serve machine at the Austin Public Library. The iPads come with apps pre-downloaded for users to use.

The iPads are already set up with a variety of apps for people to try, according to Hokanson. She hopes to reach people who might not have a chance to use the devices and help them understand the technology better.

“We know that mobile is what’s coming, and we know that the digital divide is real,” she said. “It’s always fun to be able to try out the newest and best technology, and this certainly is.”

Not only does Hokanson hope to get people using the technology, she also hopes to free up building space. With the lease on the desktop computers expiring in December, organizers hope to clear out the computer lab all together. They plan to lease newer desktop computers, but fewer of them. They’ll move them out into the middle section of the library.

“It is going to free up some of the space that we have designated for fixed computer stations,” Hokanson said. “We’re going to be able to ultimately move the computer lab … out into the library, and more integrated into the daily operations.”

She noted that it will also allow the staff to help users more easily. They hope to repurpose the computer lab into an area for different programs, such as expanding the number of story times, author visits and different learning events.

That project is still in the works, however, as organizers haven’t gotten funding yet. They hope to have a decision on the grant program in the first part of December.