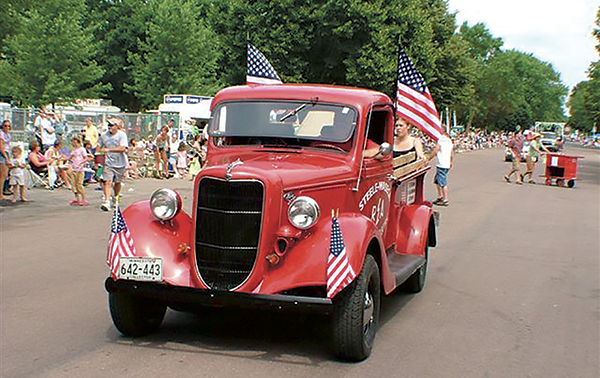 Blooming Prairie’s Old Fashioned Fourth of July celebration is about to add a little flavor.

The 40th annual Old Fashioned Fourth celebration will take place July 3 and 4. This year, the Boy’s and Girl’s Club Rib Fest, which is normally on a separate day, has moved to the Fourth of July.

Blooming Prairie Area Chamber of Commerce Executive Director Becky Noble said cookers start showing up at about 5 a.m., and sampling starts after the parade at about 1 or 2 p.m.

“It’s a lot of fun, some of those people really know how to cook,” Becky said. “We’re looking forward to that.”

But Becky’s favorite part of the Old Fashioned Fourth is more traditional.

“My favorite is the parade, because then you can just sit down and relax and watch some entertainment,” Becky said.

Around 20,000 to 25,000 people attend the Fourth of July events each year. Numbers tend to go down when the fourth falls on a weekend as families leave town for vacation. Yet many people come back to Blooming Prairie’s Fourth of July celebration, whether to be with family or because they remember celebrating when they lived in the area.

For Margaret Noble, the Fourth of July is one of the biggest family get-togethers of the year.

“We’ve always lived here, I was born and raised here so I’ve been going to it forever,” Margaret said.

Since Margaret and her husband still live in Blooming Prairie, the relatives gather at their house for an open-house style potluck. Their son, Pat and his wife, Julie, also live in town, and family and friends head to their home to listen to live music and catch up. Margaret said they get anywhere from 50 to 100 people come back to town for the Fourth of July celebration, it just depends on the year.

“We still celebrate every year, we just go to the park and there’s lots of activities going on there,” Margaret said.

While some family members just come for the day, some stay at either Margaret’s home or her son’s home, and others bring along their campers and tents and park in the yard. Family comes from all over, including Brookfield, Wis., the Twin Cities, Northfield, Rochester and more. Last year, they even had a nephew come from North Carolina. Some years, Margaret’s sister-in-law, who also lives in Blooming Prairie, comes over too, with up to 50 friends and family with her.

“It kind of varies from year to year,” Margaret said.

As for this year, she doesn’t know how many people will show up, but she thinks there will be quite a few.

“[We] don’t always know until right at the last minute,” Margaret said.

Margaret’s favorite part of the celebration is going down to the park, watching the parade, and mostly talking with family and friends.

This year’s celebration brings many attractions for both Blooming Prairie residents as well as out-of-towners.

An antique tractor show kicks off the summer festival at Blooming Prairie High School from 9 a.m. to 4 p.m. Thursday, July 3. There are even more events starting at 4 p.m. that Thursday, including a “Letter Club” Moonwalk and a Pedal Tractor Pull.

The fun continues on Friday, with the Awesome Blossom Run/Walk beginning early in the morning. Sign-ups for the run/walk begin at 7 a.m.

Friday events also include a car show, Hole-in-One Miniature Golf, Frog Bog, a Fine Arts Craft Fair and a beer garden. Stix of Fury perform at the city park at 1:30 p.m. as well.

The celebration will wrap up with Blooming Prairie’s famous fireworks display, which takes place at 10 p.m. July 4 at Victory Field.

—Trey Mewes contributed to this report.