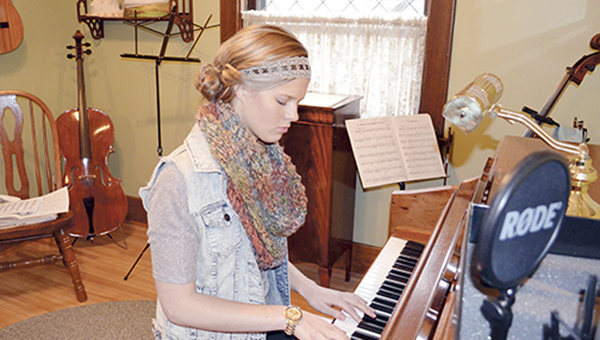 Molly Kate Kestner plays music on her family’s piano earlier this month. Kestner has drawn global attention after her song “His Daughter” was seen more than 5.5 million times on Youtube since April 20. Trey Mewes/trey.mewes@austindailyherald.com.

Molly Kate Kestner is set to appear on the Good Morning America show on Wednesday, May 14, 2014.

After her song “His Daughter” was viewed on YouTube more than 850,000 times within the first two weeks, she started getting calls and messages from different record companies, among others. Now there are more than five million views. Molly said she hasn’t chosen a label company and is taking it slow.

“We’re just kind of exploring our options now,” Kestner said. One of the big label companies she spoke with told her it was alright to not rush a decision. With as many offers as she has gotten, she said she has plenty of time to make a decision.

Her brother, Caleb, has been in charge of her publicity since she started getting messages.

But the plan right now is still pretty simple.

“The plan is go to college and kind of see where God leads me,” Kestner said. She is set to start at North Central this fall and hopes to go into youth development. Since she has never taken official vocal lessons, she wants time to train her voice before she jumps into anything. She says if it feels like the right move, she may eventually look into recording an album.

She recorded the song “His Daughter” for iTunes on Wednesday, May 7, but is not sure when she will be able to put it up due to a pending scholarship. At the latest, the song will be available at the end of June. She plans to use the money to help pay for college and would like to use any extra money toward helping to end sex trafficking.