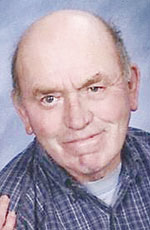 Morten Winfred Kellogg was born July 13, 1938, at Forest City, Iowa, the son of Charles Robert and Agnes (Mortenson) Kellogg. He spent his early years in the Crystal Lake area. In 1944, the Kellogg family moved to Clayton Township where he lived his entire life.  Mort attended Country School at the District No. 74 School and he graduated from the Adams High School. He attended the University of Minnesota, St. Paul campus for agriculture. He was married to Marlene Wierson on June 22, 1956, in LeRoy, Minn. They made their home in the Taopi area where they raised their four children, Cindy, Randy, Becky and Scott.

Mort’s life passion was farming; he farmed for many years with his dad, brother Jim and son Randy. In 1986 he began selling machinery for Osmundson Brothers in Adams. He enjoyed hunting, fishing and spending time with family and friends. He served as a Cub Scout leader in the ‘80s when Scott was in Cub Scouts. Mort was a lifetime member of the Marshall Lutheran Church and served on the church council. He also served in the Clayton Township Board until retiring in 2012 after 30 years.

In 1995, Mort suffered a stroke, but that didn’t slow him down. He used his golf cart to get around and loved to travel. He continued to work in his gardens.

He was preceded in death by his parents, son Randy Kellogg, sisters Marjie, Meier and Karen Kellogg and grandson Bobby Krull.

Funeral services will be held at 2:30 p.m. Sunday, April 27, at the Little Cedar Lutheran Church in Adams with the Rev. Jeremy Johnson officiating. Interment will be in the Marshall Lutheran Cemetery. Visitation will be held from 4 to 7 p.m. Saturday at the Adams Funeral Home and at the church on Sunday from 2 p.m. until the time of the service.