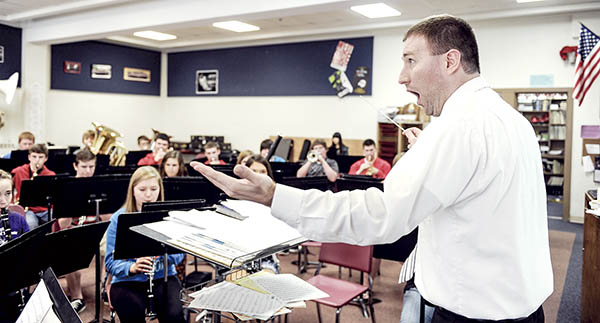 After several Austin High School and Ellis Middle School bands successfully revived the Band Blast last year, the event is returning to Austin High School’s Knowlton Auditorium as a fun, exciting way to help cap the 2013-14 school year and showcase the band program at a 7 p.m. on May 5.

The AHS and Ellis bands will play fun, upbeat music most attending will recognize — much of it from movies and video games.

“If you don’t normally come to band concerts, this is the one that you’re guaranteed to enjoy,” said Austin High School band director Bradley Mariska. 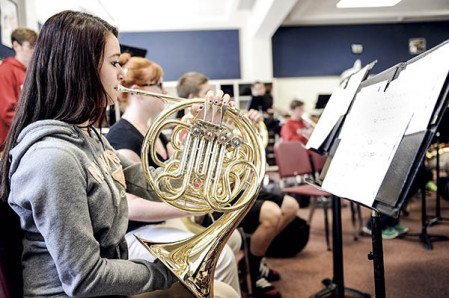 The AHS concert band — AHS’s freshman and non-auditioned band — will play selections from the soundtracks to video games “Halo,” “Civilization” and “Kingdom Hearts” in synch with a video that will play behind the band on stage.

“It’s a really, really cool way to experience the music and it’s a new challenge for the students,” Mariska said.

“You have to be just about perfect to get it to line up and if you do it’s a really, really great feeling,” he said.

The song and the concert as a whole will show off the talents of the bands, according to Mariska.

“It’s really a time where we try to make sure that every ensemble has something in the concert that’s really exciting,” he said.

The wind ensemble — AHS’s auditioned band — will play “With Hearth and Voice,” a piece they’ll play at the Big Nine Music Festival next month, and highlights from the Disney hit “Frozen.”

For younger band students, it’s their first chance to play on the high school stage in Knowlton. Mariska described it as an opportunity to show how the program is growing and excelling at all levels.

The eighth-grade band is playing selections from “The Incredibles,” which Mariska recently heard the band rehearse.

“They sound really great on it,” he said.

AHS’s jazz 1 is playing the Bill Chase song “Get It On,” which received positive reviews at the Eau Claire Jazz Festival. It’s also a song the AHS band played in 1972, when it was a relatively new hit. Mariska recently found a record of the performance that year. 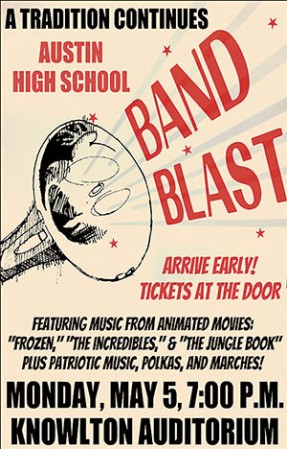 “It was really cool when I put the record on and listened to these band students in 1972 just playing their faces off,” he said.

This is the final of four AHS band concerts this school year and the only one that’s strictly a band concert. The other performances are collaborations with the choir and orchestra. While Mariska is always pleased with those collaborations, the Band Blast offers a chance to show off the band and inspire young students to play in the high school band.

“We want and need those kids to be excited about band,” Mariska said.

In the1970s and 1980s, the Band Blast was an anticipated community event, with people getting tickets weeks ahead time, according to Mariska.

“I think people were really excited to see the Band Blast back,” Mariska said.

Last year’s Band Blast featured a few surprises as Muzik, a former AHS conductor, returned to direct the alumni band, while his grandson played in the sixth-grade band.

“It was just this really cool culmination of honoring the past and establishing a new tradition for the future,” Mariska said.

Mariska said this year will be no different, and he was tight-lipped on giving away any details on this year’s surprise.

This year’s Band Blast will close with all the bands joining together to play “America the Beautiful.”

The bands aren’t done. Along with the Big Nine Music Festival in Owatonna, AHS’s spring Jazz Show is at 7 p.m. May 9 in Christgau Hall.

•“St. Louis Blues” by W.C. Handy, arranged by Andrew Balent •Music from “Pirates of the Caribbean: The Curse of the Black Pearl” by Klaus Badelt, arranged by Michael Brown

•“Circus Days” by Karl King, arranged by Loras Schissel •“Colors of the Wind” from “Pocahontas” by Menken/Schwartz, arranged by Higgins

•Theme from “The Incredibles” by Michael Giacchino, arranged by Paul Murtha

•“On a Hymnsong of Philip Bliss” by David Holsinger

•“The Flik Machine” from “A Bug’s Life” by Randy Newman, arranged by Murtha

•“I Wanna Be Like You” from “The Jungle Book,” arranged by John Wasson

•“Get it On” by Chase/Richards, arranged by Leonard Moss

•“With Heart and Voice” by David Gillingham

•”Under the Sea” from “The Little Mermaid” by Ashman/Menken, arranged by Rapp

•”America the Beautiful” by  Bates/Ward, arranged by Bob Cotter