Bruins’ Lehr commits to play with the Gophers 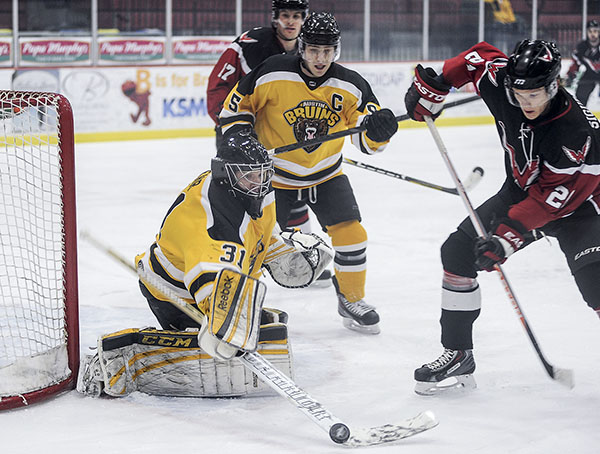 Austin goalie Nick Lehr pokes the puck away from the net during the first period against Aberdeen Friday night at Riverside Arena. — Herald File Photo

Lehr made his verbal commitment to play men’s hockey at the University of Minnesota Wednesday and he couldn’t be much happier with his decision.

“It’s a dream come true,” said Lehr, who is from Roseville, Minn. “I grew up ten minutes from the University of Minnesota and I used to go to games and watch them.”

Five of Lehr’s eight career NAHL shutouts have been this season.

“For Nick it’s awesome. He spent three years chasing his dream,” Tok said. “That’s what this league is about, getting another kick at the can.

Lehr has been a big reason that the Bruins have had a successful season this year, despite playing with a lot of first year players.

“He’s been very instrumental this season,” Tok said. “He’s been keeping our team in games. Nick’s been the backbone from day one.”

Lehr learned to be patient from the first day he arrived in Austin. He didn’t begin his career as the team’s starter, but he made sure he worked hard enough to get that chance.

Now Lehr is in the net just about every time the Bruins need a big win.

“It’s been a long process. Coach Tok and the staff have done a lot for me here,” Lehr said. “They’re always pushing me and the job is never just given to you here.”

Lehr had a couple of other schools interested in him, but he said Minnesota was the his best choice. He’s going to spend of the rest of this season trying to stay consistent so he can help the Bruins, who are currently in first place in the NAHL Central Division, make a playoff run.

Lehr never worried about finding a school to play hockey at, but he’s sure glad he finally found one.

“After three years it’s a relief,” Lehr said of his commitment. “I had always just played with the hope of something happening. Finally it happened. I’d like to thank my family, friends and coaches that have helped me along the way.”