Packer boys move into first place with win over Rockets

The Packers didn’t finish exactly how they wanted to, but they still walked away with one of their biggest wins of the season as they beat Rochester John Marshall 58-55 in a boys basketball game in Packer Gym Friday. 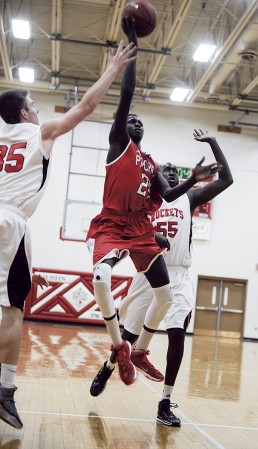 The Rockets (10-4 overall, 7-1 Big Nine) missed three 3-pointers on their final possession of the night to end the game. Austin is now in first place by itself in the Big Nine Conference.

“I feel we like we definitely made a statement,” said Austin guard Ajuda Nywesh, who had 15 points and four rebounds. “Teams are going to come out and give us everything they can and we’ve got to come out hard also.”

“You want to run some clock, but you still have to attack the basket,” Austin head coach Kris Fadness said. “[JM] is very athletic and they did a nice job of throwing some traps at us. We’ve got to be able to make the pass out of the trap and attack the basket. I just didn’t like the end. We’re seniors and these guys are used to winning. That shouldn’t be happening.”

The Packers led throughout most of the night as they were aggressive on the dribble drive and they got to the hoop early and often. Austin point guard Zach Wessels gave his team a boost in every category as he had 14 points, seven rebounds, six assists and six steals for Austin.

“We just wanted to be more aggressive tonight,” Wessels said. “They would switch their big guys on us and we could drive on them. Tonight it just worked.”

Austin forced 19 turnovers in the win, but it made the game closer by committing 16 of its own turnovers and going just 8-for-16 on free throws. The Packers are shooting 74 percent as a team on free throws for the season.

Wessels said he could’ve handled JM’s pressure a little better at the end and he hopes to learn from it.

“I take responsibility on that,” Wessels said. “I had like four [turnovers] and I’ll get better off that. I think we were fine except for the last three minutes.”

Gach Gach had five points and eight rebounds for Austin, but Fadness is hoping to get a little more offense out of the 6-4 forward.

“We’ve got to get Gach under control offensively a little bit,” Fadness said. “Defensively I thought Gach was good and he rebounded hard for us.” 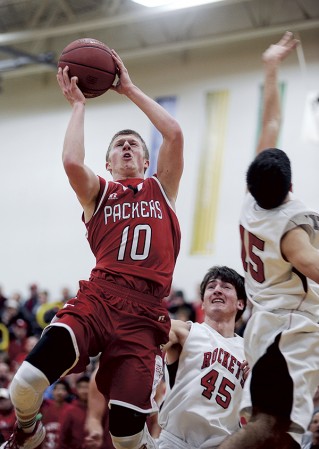 Austin’s Bret Lukes gets a bucket in the first half of the Packers’ game against Rochester John Marshall Friday night in Packer Gym. Eric Johnson/photodesk@austindailyherald.com

The Packers, who have won the last two Big Nine titles, may sit at the top of the Big Nine, but they still have to play at JM, at Owatonna and at Mankato West.

“We’re handled our home court,” Fadness said. “We gave ourselves a chance and that’s all you can ask for.”