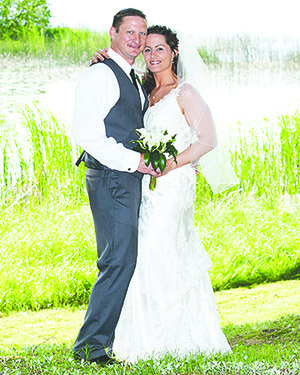 Beth Hajek, of Glenville, and Derek Nelson of Lyle announce their recent marriage.

Derek is the son of Larry and Paulette Nelson of Albert Lea. Grandparents are the late Rudolph and Truly Nelson of rural London, Minn., and the late Lorenz and Viola Lorensen of London, Minn.

Beth and Derek were married at 4 p.m. on June 29 at the Hoium Family Cabin in Nevis, Minn.

Beth is a graduate of Glenville-Emmons High School and Bemidji State University and graduated from St. Cloud State University with a master’s degree in counseling psychology/school counseling. She currently works at Wabasha-Kellogg School District as a guidance counselor.

Derek is a graduate of Lyle High School and Regents College and is a veteran of the Army and Minnesota National Guard. He currently works for AAA as Regional Life Insurance sales manager for Minnesota, Iowa, North Dakota and Nebraska.

The couple currently resides in Winona.

Brooke and Jay Michael Salinas Dennis and Cindy Jensen of Austin are pleased to announce the marriage of their daughter,... read more