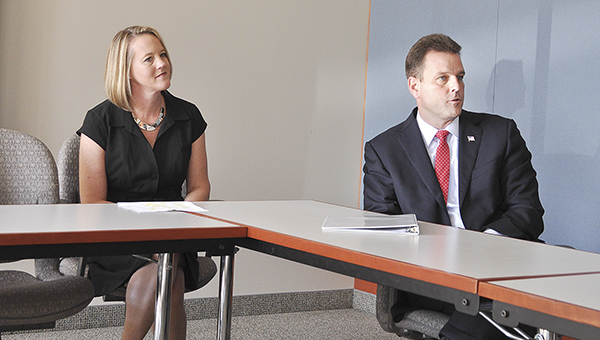 Aaron Miller, who announced his candidacy for U.S. Congress Tuesday, spoke beside his wife, Jennifer, at the Austin Public Library Wednesday afternoon.

To Aaron Miller, the federal government’s top priority should be to get its fiscal house in order.

“Washington needs to live within its means,” the Byron resident said.

Miller spoke with two Austin residents during a meet-and-greet at the Austin Public Library Wednesday afternoon. He announced his candidacy Tuesday in Rochester for the U.S. House of Representatives, and will vie for the Minnesota Congressional District 1 seat now occupied by incumbent Rep. Tim Walz, D-Minn., of Mankato.

“Allowing local government and state to find solutions to the problems within their state is a much better way than allowing the federal government to,” he said.

The Affordable Care Act, often referred to as “Obamacare,” is an example of a law that Miller said takes a blanketing approach to an issue too diverse for a single law to cover.

While Miller said there were a couple of points about the new law that made sense, such as allowing children to stay on their parents’ health plans until age 26, President Barack Obama’s administration pushed the act through too quickly. It needs further discussion and clarification, he said.

“It’s not quite ready for prime time,” he said. “What was in it was basically vague language.”

One local woman asked that Miller’s staff be available to answer the questions of his constituents if he were to be elected.

“If I contact your office with a problem, I would like your staff to be knowledgeable,” she said. “I want a specific answer to those questions.”

Miller agreed, saying he wanted to stay connected to his constituents and not get grounded in Washington.

“I don’t plan on being a multi-term politician,” he said.

Miller said it’s important to get fresh opinions in Congress, and questioned Walz’s upcoming run for his fifth term at the 2014 election.

In the meantime, Miller said he will abide by the Republican Party’s endorsement when it is given in spring next year — unlike 2012 candidate Allen Quist. Miller faces Mike Benson, a state representative from Rochester; Jim Hagedorn of Blue Earth, the son of son of former Congressman Tom Hagedorn; Quist, a St. Peter farmer and professor, and Randy Demmer, a Hayfield farmer and business owner.

Miller points to his private sector experience — as an account manager with more than 15 years of experience in the health care industry — as what qualifies him as a good candidate.

Miller has been deployed to Iraq, Afghanistan and East Africa. He lives in Byron with his wife Jennifer and their two daughters, Abigail and Emily.

Memorial services for Opal J. Bang, 95, of Stillwater and formerly of Albert Lea will be at 11 a.m. Saturday... read more