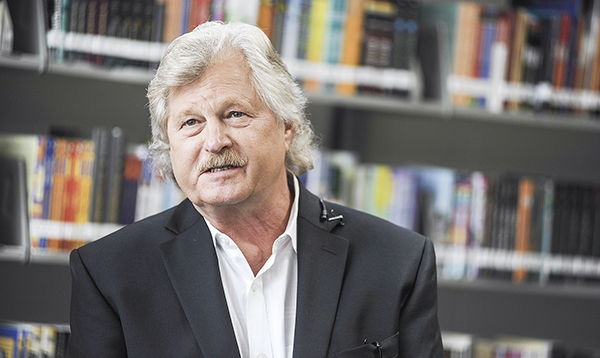 “It’s our way of just giving back to the community,” he said.

Randal, who co-owns Mackin Educational Resources along with his wife Kitty Heise, grew up not far from where the new I.J. Holton building now stands. He and Kitty came to Austin Tuesday morning as the Burnsville-based company’s employees and volunteers moved more than 5,000 books into Holton’s media center. The paperbacks, along with about 500 ebooks, will start the school off with a full library.

Randal praised Austin school administrators for understanding the use of mixed-media learning materials and weaving them into the curriculum at Holton.

“I think the important thing is you’re making this investment and you’re moving ahead,” Randal said. 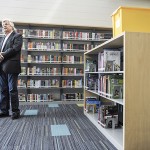 Two Mackin employees and eight Austin Public Schools employees started bringing in the boxes of books around 9 a.m. Tuesday morning, and wrapped up the process about three hours later. Math and literature textbooks stood on carts nearby, while rows of fantasy novels and reference books neatly lined the shelves.

I.J. Holton Intermediate School principal Jean McDermott said Mackin simplified figuring out what needed to be in the new school’s library — a process that otherwise could have taken months.

“How do we put the right books in there?” she said.

John Alberts, the district’s educational services director, helped figure out how to work library supplies into the school’s curriculum.

McDermott said students would have unlimited access to the school’s collection of ebooks, so a teacher could ask all of his or her students to view the same book without any issues.

Brian Kretzmeyer, Minnesota sales consultant for Mackin, said the library would be set to open after the visit.

Randal said Mackin delivered the materials so they would be ready to place on the shelf, and everything was in “exact Dewey order” and ready to check out.

Compared to other new schools Mackin has served, Kretzmeyer said I.J. Holton was easy to move into. Often, carts of materials get in the way of construction workers putting finishing touches on the building. 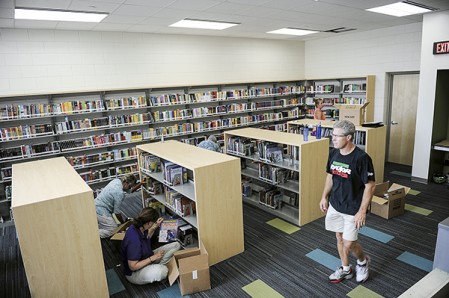 Books are shelved in the library of the I.J. Holton Intermediate School Tuesday morning. The books are from Mackin Resources whose CEO Randal Heise is an Austin native. Eric Johnson/photodesk@austindailyherald.com

While he predicted the printed word to some extent would always be a component of future libraries, Randal said social media and digital book formats made having a flexible collection important. The school will have video conferencing capabilities in the media center also, allowing students to speak with guest instructors from afar.

“We’re dealing now with a changing world,” he said. “There’s more of a synergy in the educational process.”

Randal said the technology aspect helps get students interested in what a school’s library has to offer, while paperback copies of books in Holton’s collection come at a low cost and are easy to replace.

The library is more likely to be an atmosphere of cooperation than quiet study, McDermott said.

“It’s going to be the place where we come to work with our peers,” she said.

Elsewhere in the new I.J. Holton Intermediate School, McDermott said the final touches are being made. The computers should be wired in and running by the middle of next week, and teachers may be getting settled as soon as Aug. 19. An open house and dedication ceremony will be held Sept. 28.

“You could only dream about a building like the building we’re offering our fifth- and sixth-graders,” McDermott said.

NORTHWOOD — Authorities have released the name of a woman who was reportedly stabbed and killed Monday morning in Northwood’s... read more