In wake of fair, big plans for next year 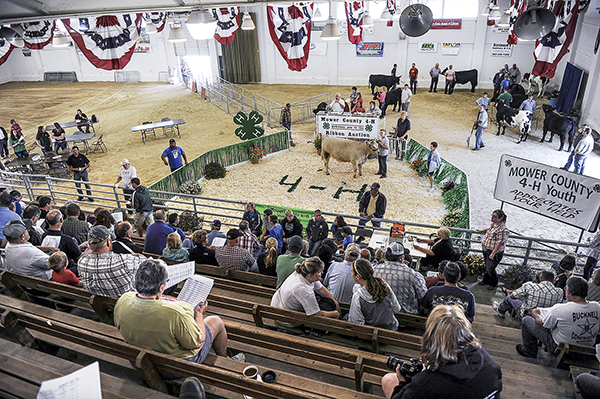 People settle in for the 2013 Ribbon Auction Saturday morning at the Mower County Fair.

The dust has hardly settled at the Mower County Fairgrounds, but fair board President Neal Anderson has already hinted at big plans for next year.

Anderson said Monday the fair would have a “big new addition” when it returns in 2014, though he would not go into further detail yet.

This year’s fair came to a close Sunday. The event saw a turnout of more than 90,400 visitors, and the activities were well-attended.

“We had great participation in all the competitions,” he said.

This year was the debut of a new 1,500-seat, $700,000 grandstand, which workers finished constructing shortly before the fair. The previous grandstand was condemned in July 2012 after more than 75 years of use, and burned as part of a firefighter training exercise in February. Anderson called the structure “a real showpiece for the fair.”

“The new grandstand was a huge success,” he said. “We were able to get all our events in.”

Over at the Crane Pavilion, the 4-H ribbon auction Saturday drew in $9,000 more than last year, he said.