Candidates taking part in the Lincoln-Reagen Picnic visit locals during the third annual event at the Veterans Pavilion.

Despite 90-degree temperatures, a record 90-plus Mower County Republicans showed up at Austin’s Veterans Pavilion for the third annual Lincoln-Reagan Picnic.

In addition to an evening of fun and fellowship, the crowd heard from a group of seven candidates who have already announced their intention to run for major state-wide and federal offices. Vying for a spot on the ballot against Minnesota DFL Governor Mark Dayton in the fall of 2014 are Scott Honour — a Twin Cities area businessman, Jeff Johnson — Hennepin County Commissioner and current Republican National Committee member for Minnesota, and Kurt Zellers — member and former Speaker of the Minnesota House. 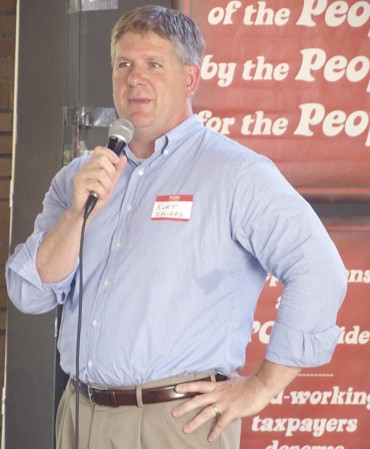 Kurt Zellers — member and former Speaker of the Minnesota House, speaks during the third annual Lincoln-Reagen Picnic at the Veterans Pavilion.

The group also heard from Jim Abeler — currently a member of the Minnesota House from Anoka. He spoke about his intention to challenge Al Franken for U. S. Senate.

Wykoff showing off its faces with new exhibit