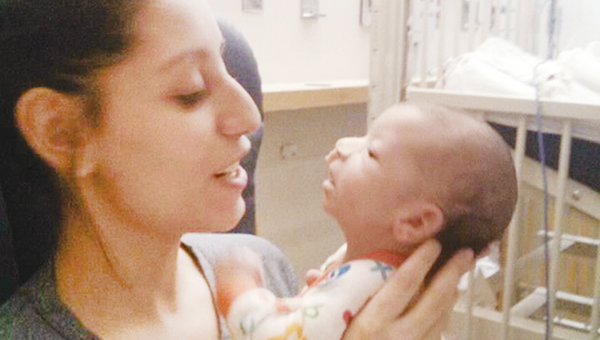 Lindsey Nagel holds her son, Rico, who was born on Dec. 19, 2012. Rico was in protective custody for almost two months and at the Mayo Clinic in Rochester until he was returned home on March 8. Photo provided

A Brownsdale couple in court because of their child’s medical conditions and their views toward his HIV treatment should soon know if they retain full custody.

Mower County District Judge Fred Wellman can extend the 15-day deadline for the decision in the case by an extra 15 days while both the prosecution and defense review transcripts and submit their final arguments in writing.

Initially, a court order allowed Mower County Human Services to remove Rico Martinez Nagel, now 3 months old, from his parents’ home on Jan. 18. However, Rico was allowed to return to his parents, Lindsey Nagel and John Martinez, on March 8. The case has revolved around the parents’ and grandparents’ view about use of an antiretroviral drug and suspicion about their willingness to administer it. Lindsey and John testified again Tuesday that they never skipped medications nor will they.

The two-day trial adjourned Tuesday afternoon after Alice Snater, guardian ad litem for Rico, recommended the parents retain custody with some exceptions. While she expressed concerns about the grandfather’s “hostile and negative opinion of almost everybody in the case,” she recommended the parents continue to be monitored every other day to ensure they are administering HIV treatment, and monitoring could be reduced to three times per week if all is well. From there, she further recommended a review hearing in 45 days. Lindsey and John have administered HIV medications on the Internet via Skype to show health and county officials they are complying with legal medical requirements for an HIV positive child.

The original petition for a CHIPS case mentioned the parents missed two doctor’s nutritional appointments in January. John and Lindsey testified that they thought those appointments were optional, that they sought a second opinion and tried to reschedule those appointments. Both parents said they were on their way to Seattle to seek a second opinion from a doctor when they received a call from Mower County Human Services. Because of that, they added, they turned around in North Dakota and scheduled an appointment with Human Services for the next afternoon to show they were administering drugs. However, they say a deputy and social worker arrived at their house much earlier the next day, only to take the child.

Rico spent the next 50 days in the hospital and required a feeding tube and fluids. He has since gained weight and is doing better.

Much of the controversy surrounds an antiretroviral drug called AZT. Lindsey was on the drug until age 2, as she tested positive for HIV when her parents, Steve and Cheryl Nagel, adopted her 22 years ago. Steve and Cheryl stopped using the drug because they say it was slowly killing Lindsey, causing severe cramps and pain. Mower County assistant attorney Aaron Jones showed YouTube videos of the family speaking out against the drug and repeatedly questioned whether Steve and Cheryl would persuade Lindsey and John to discontinue medications for their child.

However, because of anemia, doctors have since switched Rico from AZT to a similar antiretroviral, which Lindsey and John say they are administering.

On Monday, Annette Ekoue, a county social worker, testified the couple have not missed a treatment and have been diligent about delivering medication. She suggested reducing the number of county check-ins. The parents declined, she said, as they didn’t want to take the chance officials might think they missed a treatment.

Yet earlier Monday, Jones questioned Dr. W. Charles Huskins, a Mayo Clinic expert in pediatric infectious disease who was on call when Rico was born, about concerns the clinic staff had at the time of the birth. Huskins testified Lindsey Nagel failed to provide written documentation in her initial medical history that she was infected. refused recommendations that she undergo treatment while pregnant that could reduce the risk of transmission of the HIV to the fetus to “less than 2 percent.”

Lindsey testified that Mayo medical professionals already knew she was HIV positive from past records, confirmed it with her while she was pregnant, and she never received any advice about HIV risk-reducing drugs for her unborn child. Lindsey and her family say about 12 people, including lawyers, barged into her room when the child was born and demanded she consent to testing and treatment for the child. Lindsey testified that was the first time she learned there could be child endangerment charges. More argument on Monday and Tuesday centered around the notion Lindsey and John only administer the drugs because there is a CHIPS case.

The Mower County Attorney’s Office and Health and Human Services are legally barred from commenting in the pending case. Lindsey and John’s attorney, Scott Cody, also refrained from commenting on behalf of his office’s policies.

GENEVA — A $2 billion experiment on the International Space Station is on the verge of explaining one of the... read more