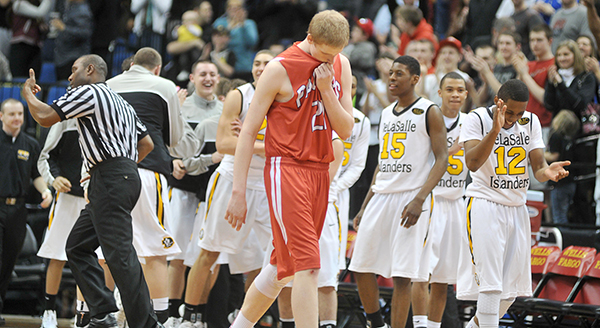 Austin’s Joe Aase walks off the court following the Packers’ loss to De La Salle in the Class AAA championship Saturday night at the Target Center.

The Packers simply ran out of magic.

Austin couldn’t find its shot as the De LaSalle Islanders took the Class ‘AAA’ boys basketball state title from them by a score of 50-33 at the Target Center Saturday. 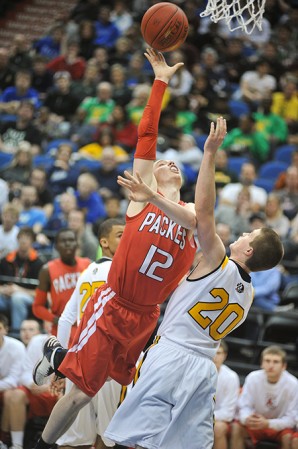 Austin’s Zach Wessels shoots over De La Salle’s Luke Scott in the second half Saturday night of the Class AAA championship in the Target Center.

The Packers (30-1 overall) trailed by as many as 16 and pulled to within 40-30 when Zach Wessels hit a runner with 6:41 left in the game. The Islanders (30-1 overall) responded by playing stall ball as they ran out the clock and hit free throws the rest of the way.

“You just think the run’s never going to end,” said Austin senior Tom Aase, who finished with 14 points on 6-of-10 shooting to go along with six rebounds and three blocks.

Austin head coach Kris Fadness said it will be tough to put together another group that can make a run like this team, which went to state for the first time in 30 years and took second place this season.

“When you’re an out-state public school, it’s tough to compete with metro private schools,” Fadness said. “We had two years where we figured it was our best chance to win state. It’s going to be a lot to ask someone to repeat what these guys just did.” 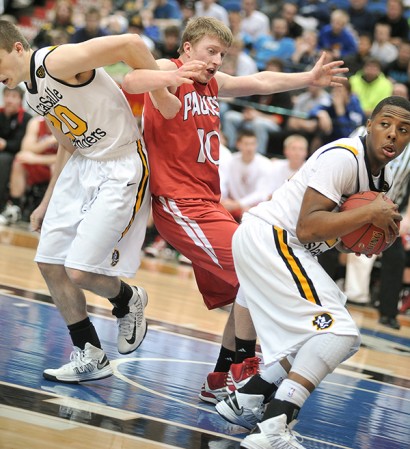 Austin’s Bret Lukes gets tangled up with De La Salle’s Luke Scott going for a rebound during the second half of the Class AAA championship Saturday night at the Target Center.

Aase, who will play at Division II Sioux Falls University next season, started the game with a two-handed jam and blocked a dunk attempt by James Lawson as he ended his high school career with a bang.

Joe Aase, who will play at Division I Davidson College next season, ended his career with a tough night as he went 1-for-10 from the field and scored just two points.

As a team, the Packers shot just 37 percent from the field, but they held the Islanders to 38 percent shooting. Each team finished with a season-low point total in what turned out to be a defensive battle.

“Our shots just weren’t going in,” said Wessels, who finished with eight points and four rebounds. “But we played great defense. They’ve got three Division I guys, and they’re really good. Reid Travis is so great.” 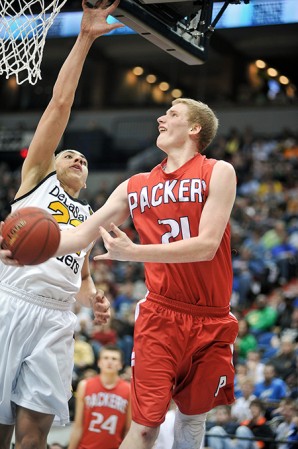 Austin’s Joe Aase goes underneath against De La Salle’s Reid Travis during the second half of the Class AAA championship Saturday night at the Target Center.

Austin held Travis to 17 points, and the Islanders made their biggest move when Luke Scott, who used to play AAU basketball with the Aases, hit a pair of 3-pointers from the baseline to cap a 23-6 De LaSalle run that lasted nearly 16 minutes.

Wessels, a junior who has already received an offer from Sioux Falls, said it’s going to be tough to move on without a strong group of seniors.

“I’ve played with those guys for three years,” Wessels said. “It’s going to be hard, but change always comes.”

Tom, Joe and Wessels were all named to the Class AAA all-tournament team along with the best of St. Paul Johnson, Marshall and De LaSalle.

Austin hung with De LaSalle for quite a while until the end of the first half when the Islanders had an 11-point lead, which tied Austin’s largest deficit of the season (Winona and The Blake School).

With seven minutes to play, it still looked as if Austin had a shot after a Tom Aase 3 lifted the team and the crowd, and brought the Packers within 12. Tom scored on the next possession with a layup, as well, but De LaSalle sat on its 10-point lead and played keep-away. The Islanders only shot 55.6 percent from the free throw line in the second half, but they still had 10 of their points come from the line, compared to Austin’s total of 16 points in the second half. Austin shot 63.6 percent from the free throw line, but it only had five attempts all night. 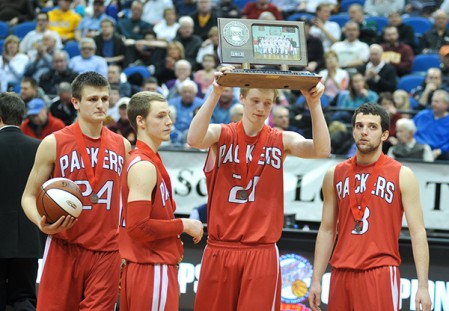