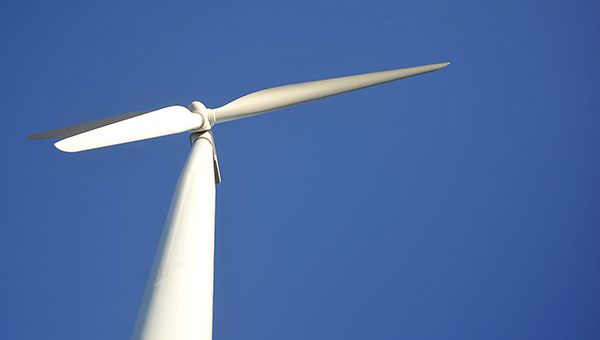 Wind turbine farms saw one of their big points of concern, the wind production tax credit, get pushed through with the recent ‘fiscal cliff’ deal. -- Herald file photo

A long delay to build the largest wind farm to date in Mower County could soon be over.

After Congress extended the federal wind production tax credit — a key subsidy for wind energy — as part of the “fiscal cliff” agreement, RES Americas officials said the 300-megawatt Pleasant Valley Wind Farm in Mower County could be done by the time the agreement expires.

“It is one of the largest wind farm developments in the state of Minnesota with advanced permitting and [is] ready to build,” RES Americas Vice President of Development Joe DeVito said in an emailed response to the Herald.

However, there are no firm plans to begin construction in 2013, as RES Americas is still working to finalize a power purchase agreement for the project.

Even though permitting has been in place, the project near Dexter, Sargeant and into Dodge County has been on hold for nearly two years, largely due to the uncertainty leading to the production tax credit’s Dec. 31, 2012, expiration.

As previously reported in the Herald, wind farm development slowed significantly in 2012, as developers awaited the credit’s fate.

The credit extension mainly affects new projects. Previously, wind energy projects had to complete construction and begin producing electricity before they could qualify for a 2.2 cent-per-kilowatt-hour tax credit. But the one-year extension passed on Jan. 1 will allow projects to collect the credit as long as they start construction in 2013, even if they can’t finish erecting the turbines until 2014.

The federal credit provides subsidies to help wind power compete with other sources of electrical power.

The one-year extension, which includes language to allow projects under construction by the end of 2013 to be eligible to claim the PTC after 2013, is critical to sustaining the U.S. market going forward.

“I call it a ‘one-year plus,’ because of the construction qualification. It makes it seem longer,” said Joe Sullivan, regional policy manager for Wind on the Wires, a regional wind energy association based in St. Paul.

DeVito said Pleasant Valley could be completed within that time.

“Pleasant Valley Wind Farm is shovel ready and is capable of meeting the 2013 construction start requirement in the PTC extension legislation,” DeVito said.

One of Pleasant Valley’s state permits expired at the end of the year, but RES Americas has requested an extension, which DeVito expects to be approved early this year.

When the credit has expired or gotten a last-minute extension in the past, wind development ground to a halt the following year. Developers couldn’t take advantage because wind farms typically take 18 to 24 months to complete, and projects could not get built in the 12 months before the credit expired again.

By taking the decision to the last minute, some damage has already been done. In 2012, Vestas laid off more than 20 percent of its employees in the U.S. and Canada — most were manufacturing workers. That won’t change with the extension, as the company’s 2013 workload will still be roughly the same as planned, said Andrew Longeteig, a communications specialist representing Vestas.

“Overall, the U.S. market will be stronger in the next few years as a result of this week’s PTC extension,” Longeteig said in an emailed response to the Herald. “However, we can’t speculate on how the PTC extension will affect future employment levels at our U.S. factories.”

Vestas built and maintains the turbines at High Prairie in the LeRoy area.

The extension is a boost for the wind industry heading into 2013, according to DeVito.

“While we do not expect 2013 to be as active as 2012, the extension will preserve tens of thousands of jobs, and prevent some investors from dropping out of the market,” DeVito said.

Most in the wind industry are pleased the credit was extended, but it’s not entirely positive.

“Even though the late timing of the extension will result in a significant reduction in 2013 installations when compared with past years … the U.S. market will nonetheless be stronger as a result of the PTC extension,” Longeteig said.

While the extension will preserve thousands of jobs, DeVito said the agreement is far from perfect.

Even with the stipulation for construction in 2014, the credit is set to expire again in a little under a year, and industry leaders are calling for a more permanent solution.

“The extension is a short-term policy fix — what’s most needed is a comprehensive energy policy that sends predictable long-term signals to the market,” DeVito said. “Businesses and investors are prepared to accept market risks, but they are driven away by uncertainty.”

While Longeteig admitted a short-term fix is better than allowing the credit to expire, he agreed more certainty is needed.

“The greater the policy certainty, the stronger the wind industry will be,” Longeteig said.

According to DeVito, the credit has helped attract $15 billion in annual private investments each of the last five years, and more stability will be a key to sustain the growth.

If Congress can’t settle on a long-term policy, the industry could be back in a familiar uncertain position soon.

“Without such a policy, the wind industry will find itself working with Washington again in the near future to resolve uncertainty around tax policy,” DeVito said.