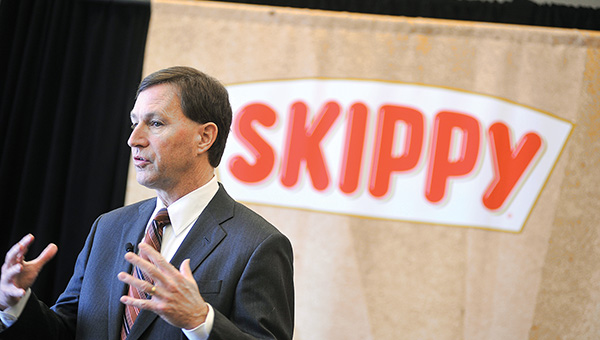 Hormel Foods Corp. apparently has a hankering for a peanut butter and Spam sandwich. The company primarily known for cured, smoked and deli meats said today it’s buying Skippy, the country’s No. 2 peanut butter brand, for about $700 million, the largest acquisition in company history. 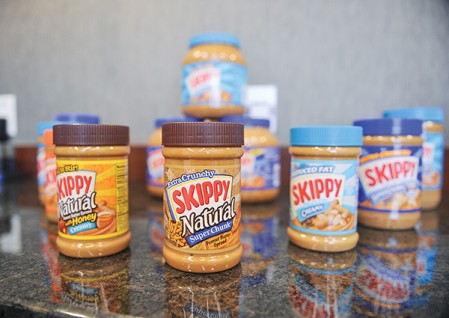 Jars of Skippy peanut butter sit out during a press conference Thursday morning regarding Hormel Foods acquisition of the iconic brand.

Skippy, which was introduced in 1932 and is a staple in American pantries, is intended to increase Hormel’s presence in the center of the supermarket where shelf-stable foods are sold. It also gives the Austin-based company a clearer path for growth overseas; Skippy is sold in about 30 countries and is the leading peanut butter brand in China.

In the U.S., the Skippy line consists of 11 varieties of peanut butter, including Skippy Natural. Hormel noted that Skippy is the leading brand in the faster-growing subcategory of natural peanut butter. It estimated peanut butter as a $2 billion category.

Hormel expects annual Skippy sales of about $370 million, with almost $100 million of that from outside the United States. Hormel CEO and president Jeff Ettinger said at a press conference today that about $30 to $40 million of Skippy’s international sales come from China, and that country and Canada make up a large chunk of sales outside the U.S.

The deal includes Skippy manufacturing plants in Little Rock, Ark., and Weifang, China, which the company hopes will give it an in-road to China for increased Spam sales.

“China has been a focus for more than a decade … and [the peanut butter market] is growing rapidly there. I hope it will compliment our growing Spam market [in China].”

Ettinger said the acquisition won’t have a direct impact on Austin — besides maybe a few new corporate positions — as they have no plans to merge or move any current or new manufacturing facilities.

While Ettinger said the company had to remain tight-lipped and hadn’t told most of its marketing team about the deal until today, he’s excited about turning Skippy loose to creatives.

“We’re going to find ways to take the product out of the jar,” Ettinger said with a smile, and not ruling out a peanut butter and Spam sandwich.

Hormel expects the deal to modestly add to its fiscal 2013 results and add 13 cents to 17 cents per share to fiscal 2014 earnings. Ettinger added the $100 million in international sales will be an immediate 30 percent boost for its “all other” international division. Ettinger said Skippy will also be its largest brand in the company’s grocery division.

The transaction, which still needs regulatory approval, is expected to close in the U.S. in the second fiscal quarter of 2013, and by the beginning of fiscal 2014 in China.

Unilever, based in the Netherlands and the U.K., is one of the largest consumer products companies in the world. It makes Vaseline, Dove soaps and Lipton tea. The company had indicated last year it was considering selling Skippy as part of a strategic review.

Hormel’s acquisition of Jennie-O Turkey in 2001 was its second largest acquisition behind this one. Ettinger said while there are no other acquisitions to announce, Hormel is always looking for new ventures, and the company, with no debt, is in a very good position to do so.

—The brand holds the No. 2 share in this growing center-of-the-store category and is the leading brand in the faster-growing subcategory of natural peanut butter.

—Peanut butter is a $2 billion category with a 74 percent U.S. household penetration and is the second-most popular sandwich behind ham in the United States.

—Internationally, Skippy peanut butter is the leading brand in China and is sold in more than 30 countries on five continents.

—Total annual sales are expected to be roughly $370 million, with nearly $100 million of those sales outside the United States.

—The purchase price is approximately $700 million.

—Full-year accretion in fiscal 2014 is expected to be between 13 and 17 cents per share.

In the Herald’s Friday print edition: An in-depth report on Hormel’s acquisition of Skippy.