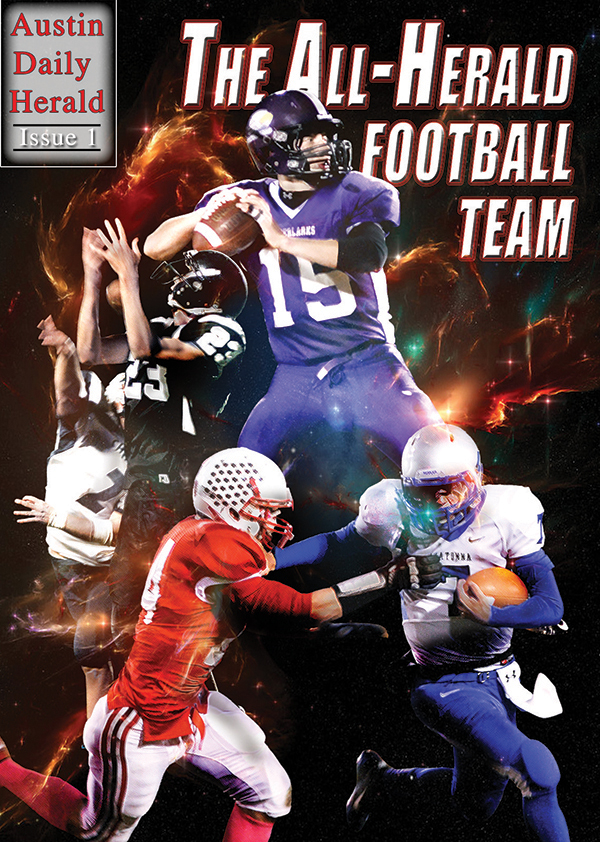 The Austin Daily Herald has released its 2012 All-Herald Football Team featuring plenty of the area’s most talented football players.

The senior, who made the Minnesota All-state Nine Man Football team, racked up 29 catches for 551 yards (10 per catch) and 12 touchdowns.

The three-year starter finished his senior year strong as he provided plenty of solid blocking for a BP offense that averaged 35.5 points per game.

The junior was a physical force up front for the Vikings.

The senior was a fiery competitor and he helped lead a vaunted Superlark offense.

The senior was undersized, but blocked with a burst that made GM a dangerous team.

The junior used his size to move a few piles for the Packers this season.

The speedy senior racked up 56 tackles from the secondary.

The senior always matched up against the best receiver on the other team on a stingy Superlark defense and finished the year with 112 total tackles.

The senior missed seven of GM’s 14 games, but still finished with 65 tackles and was named to the Minnesota All-state Nine Man Football team. On offense, Stejskal was a key blocker as he ran for 202 yards (6.1 per carry) and four TDs.

The senior finished his three-year career as a starter with 74 total tackles (49 solo) and one interception.

The senior led the Superlarks with 152 total tackles and he added six sacks.

The senior filled up the middle for BP as he finished with 54 tackles (10 solo) and 12 tackles for a loss.

The senior finished the season with 89 total tackles and an area’s best eight sacks.

The senior held his own and then some as he led the Packers with 81 total tackles (55 solo) from the defensive end spot, and he added a sack as well.

The senior racked up 958 all-purpose yards on the season for the Rebels. He ran for 650 yards (5.9 per carry) and nine touchdowns and caught 24 passes for 308 yards (12.8 per catch). Schmitz also had 135 yards on eight kick returns. On defense, Schmitz finished with 75 tackles, one interception and two fumble recoveries.

The sophomore didn’t show fear in his first year at the helm, throwing for 2,945 yards, 38 TDs and nine interceptions, while connecting on 57 percent of his throws.

The sophomore burst onto the scene in the second half of the season finishing with 404 yards rushing (4.9 per carry) and four TDs, and catching 14 passes for 194 yards (14 per catch) and four more scores.

The junior threw for 1,404 yards while completing 51 percent of his passes. He finished with 12 TD throws and eight interceptions. Synoground ran for 253 yards and 3 TDs.

The freshman burst onto the varsity football scene and did some damage in limited action. In just 74 carries, Connor ran for 385 yards (5.2 per carry) and four TDs.

The senior did a little bit of everything this past season for the Packers. He ran for 100 yards (4.6 per carry) and two TDs, caught 10 passes for 94 yards and a score and had 518 kick return yards (19.9 per return) and one score. Olmsted also had nine tackles and served as the team’s long snapper.

The junior was a strong force up front as he finished the season with 55 tackles, 1.5 sacks and three forced fumbles.

Austin's Steph Justice drives the lane for a lay-up during the first half against Owatonna Friday night in Ove Berven... read more