Tom Aase commits to U of Sioux Falls 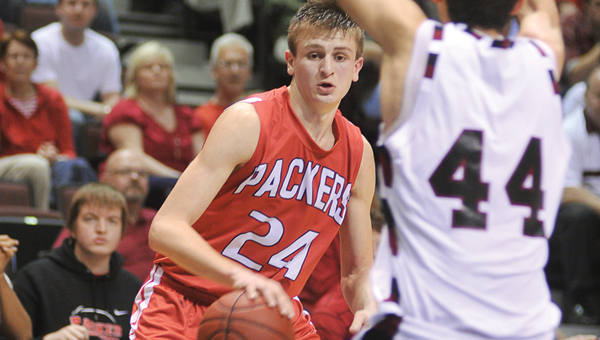 Austin's Tom Aase starts to drive on New Prague's Sergio Najera during the second half of the Section 1AAA title game last week at the Mayo Civic Center in Rochester. The Packers fell 71-66 in the state quarterfinals to St. Paul Johnson. -- Herald file photo

The move has been a long time in the making as Aase has spent the last couple of summers touring the country in the AAU circuit. Now he can reap the benefits of his hard work.

Aase, a 6-5 senior, averaged 11.3 points, 7.4 rebounds, 2.2 blocks and 1.45 steals for the Packers last season. Aase was efficient on offense as she shot 53 percent from the field, 32 percent on three-pointers and 73 percent from the free throw line.

Over the summer, he’s been looking to improve his offensive skill set and USF liked what they saw out of him.

“I’ve worked on developing my offensive game and they liked it,” Aase said. “They see me as a versatile four (power forward) and they said I have a chance to play right away. But they can’t guarantee anything yet.”

Aase threw down an alley-oop dunk at the end of the Section 1AAA title game last season to send the Packers to their first state tournament in 30 years.

USF went 20-9 overall last season, and fourth year head coach Chris Johnson has guided the Cougars to an NAIA National Tournament berth and a Great Plaines Athletic Conference championship in each of his first three seasons.

USF is joining the Northern Sun Intercollegiate Conference this year and the NISC is one of the top Division II conferences in the country.

Aase said that it’s important for him to compete on a good team in an elite conference and he also doesn’t mind that Sioux Falls is a three-hour drive away.

“It’s not super far away, but it’s not like it’s close enough where my parents will be checking on me,” Aase said. “It’s far enough away.”

Austin head basketball coach Kris Fadness, who brought Aase up to the varsity team as a freshman, has seen him grow over the past few seasons. Fadness thinks Aase will be ready to make the step up to Division II basketball next year.

“I think he took it to a different level last year, especially over the second half of the season,” Fadness said. “When he first came up to varsity it was to play defense and rebound, now his game is growing offensively and he continues to gain confidence in his abilities. Tom is also just a tough young man, who is hard working and resilient.”

Now that his decision is out of the way, Aase is ready to focus on the upcoming basketball season, where the Packers will try and get back to the state basketball tournament.

Aase said he may have had a chance at another offer, but he wanted to choose his school before the high school season was underway.

“It’s a big lift off my shoulders. I’ve been thinking about this the last three years,” Aase said. “Now I can focus on Packer basketball.”