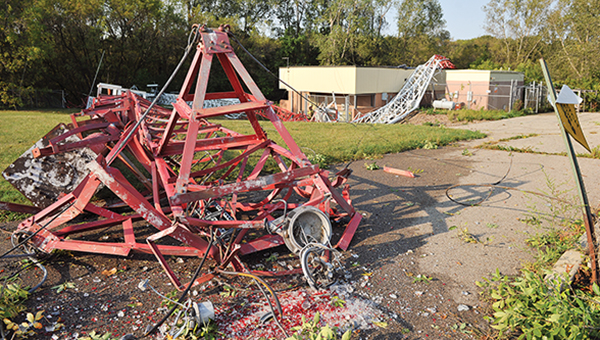 The very top of a transmitter tower lays partially on the parking lot in the southwest corner of the Riverland Community College west campus this morning. The tower, owned by KSMQ, fell at around midnight as powerful storms swept through the area. — Eric Johnson/photodesk@austindailyherald.com

KSMQ could be off air for as much as two weeks

Austin and the surrounding area weathered Tuesday night’s storm — for the most part.

While a quick-moving storm with straight-line winds breezed through the area, knocked down branches and caused a few power outages, winds also knocked down a 440-foot transmitter tower in Austin. The tower, owned by KSMQ TV and leased to wireless providers including At&T, fell down between midnight and 1 a.m. Wednesday, according to Eric Olson, KSMQ president and CEO.

“I got up at six and noticed we were off the air.,” Olson said. “When I was coming to work, I noticed trees down in my neighborhood, but I didn’t think we got hit that hard.”

Wind speed in Austin gusted to 53 mph at the Austin Municipal Airport and as high as 74 in northwest Rochester, according to the National Weather Service in La Crosse, Wis.

KSMQ could be off the air for as much as two weeks, Olson added. The tower is a mangled mess.

“It’s twisted kind of like a cornstalk.,” Olson said. “It’s kind of amazing.”

While the tower came crashing down, the Austin Police and Austin Fire departments report no injuries in the Austin area.

Damage to residential areas was minimal. Austin Utilities crews were out from midnight to early Wednesday morning connecting power back to only a few homes and clearing branches from power lines.

“We didn’t have any mass outages,” said Tom Tylutki, director of electric distribution at Austin Utilities. “It was just little, spotted things here and there.”

Among high winds and lightning strikes that temporarily caused power to blink, 1/2 to 3/4 of an inch of rain fell across the area, as well. However, some dry, cool, fall weather may be on the horizon, according to the NWS.

The stormy weather may be done for a while, too. Temperatures for the next couple days could reach mid 70s with a high in the mid 60s on Friday. Overnight lows by this weekend could dip to the mid 40s.