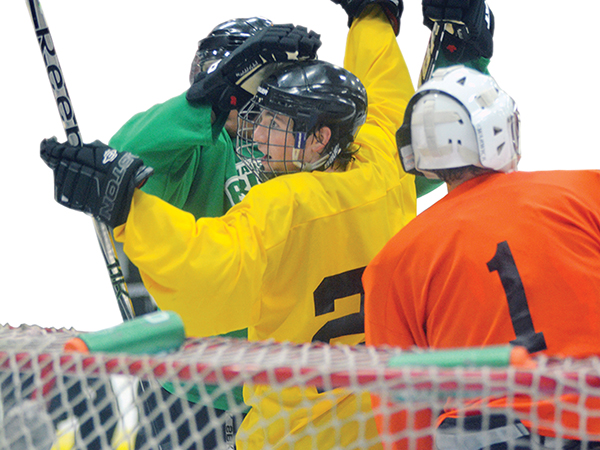 CJ Smith is juggling both school and hockey.

Being an Austin Bruin is a tough enough task for most athletes to handle. There are skills practices, regular practices, dry land workouts, and long weekend road trips.

It’s even a greater challenge for players who are still in high school.

Bruins forward CJ Smith knows that challenge all too well as he played for the Bruins during his junior year of high school last year, and now he’s finishing up his senior year while playing for the local NAHL hockey squad.

“It gets to be a lot of work. But you’ve got to stay on top of your schoolwork, because coach looks at it,” said Smith, who is from Richfield, Minn.

This year, the 17 year old lives with goalie Jason Pawloski, a 16-year old from Omaha, Neb., who is also attending classes at AHS, and the two share the similar razzing from their older teammates.

“We get made fun of and a lot of guys joke about how school was today, because they get to sleep in until 11 a.m. and we’ve gotta get up at 7 a.m.,” Smith said. “It gets kind of tough, but you get used to it.”

Austin Bruins head coach Chris Tok realizes that it’s difficult for his younger players, but he also acknowledges that it will help prepare them for college hockey. Both Smith, who has three points in two games this season and had 27 points in 53 games last season, and Pawloski, who had 18 saves in a 5-4 win over Johnston in the NAHL Showcase, each have a chance to play at the next level.

“They have to balance their time almost like a college student. If they don’t have grades, they don’t go to college and it’s more important to go to college than it is to play hockey,” Tok said. “Sometimes it’s difficult. The teachers [at AHS] and the principal, Brad Bergstrom, have been wonderful. They understand [our players] are trying to get to the next level of college hockey and both kids have a wonderful shot of doing that.”

Smith said he does have the advantage of getting to know some of the AHS hockey players and he’ll often strike up conversations about the NHL or how to get better.

He’s also gotten the chance to learn from some Division I hockey players while playing with the Bruins.

“It’s fun and it’s good learning to play with more experienced guys,” Smith said. “Now that I’ve been here a year, I get to teach some of them, too.”